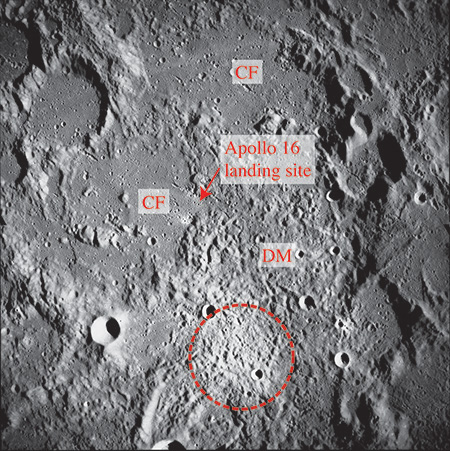 Swirls are bright, often splashy-looking areas that are typically associated with strong magentic anomalies. Reiner Gamma is the most familiar swirl on the Moon. There are only a few known swirls but the number is now increased by one with the recognition that the bright rubbly spot (red circle) on the rim of Descartes crater is the strongest magnetic anomaly on the nearside of the Moon. Prior to Apollo 16 the bright spot had been recognized as being unusual in that it wasn’t associated with a young impact crater, and it was interpreted as ejecta from a young volcanic eruption. Fast foreward to 1999 when very low level (18.6 km!) passes over the area by the Lunar Prospector spacecraft revealed the strong magnetic field, suggesting to Nicola and her colleagues that the bright area is a swirl. Because the thorium and iron concentrations over the swirl are no different than nearby non-bright areas, the source of the magnetic anomaly is thought to be at depth and not simply on the surface. The rubbly and furrowed terrain called the Decartes Mountains (DM) is interpreted to be ejecta from the formation of an impact basin, either Imbrium or Nectaris. If so, the basin ejecta became magnetized during the impact event, and the mound of rubbly terrain is a local magnetic anomaly. The bright spot results, according to current ideas, from the magnetic field which diverts solar wind from weathering (darkening) these surface rocks. This model is consistent with other observations, but there are still unanswered questions - for example, why is the rest of the DM formation not magnetized? Is it thicker at the Descartes rim? Or is the DM not basin ejecta, but rather, harkening back to the early 1970s interpretation, a volcanic unit erupted from the floor-fractured Descartes crater? Perhaps high resolution imaging from SMART-1 and improved processing of the Lunar Prospector mag data will provide further clues.

Yesterday's LPOD: Two Views in One