This is one of the many core samples returned from the lunar landings. Lunar core samples provide a record of the stratigraphy of the local lunar surface where they were taken. In the photo above, of Apollo 17 core tube sample 79002 taken from Van Serg Crater at Taurus-Littrow. It is part of a double drive tube, hammered into the surface not drilled. It was dissected at the pristine sample laboratory of the Lunar Curatorial facility at Johnson Space Center by Carol Schwarz in November 1986. This is the top half of the double core.
Lunar cores didn't quite prove quite as useful as first thought in finding out the stratigraphy of the landing site on the Moon, as the regolith was very dependent on local geologic history. Each crater gardened the small part of the regolith where the cores were taken. Cores taken in the same region taken only a short distance apart showed different layer orders . But they did provide some data on the solar wind history and information about the older regolith below. Some of the early Apollo 11 core material was used in the biological quarantine experiments to see if any microbes lived under the lunar surface. The color chart along the top of the tube is a Munsell color chart which is used for soils to give a standard description of the color of the lunar soil. The top 8cm section of this core was found to be more mature soil and darker in shade from solar wind increasing the iron content. The lower layers were less disturbed over time by meteoroid bombardment. If you always wondered what lies beneath the lunar surface that you see with the telescope, this is it! 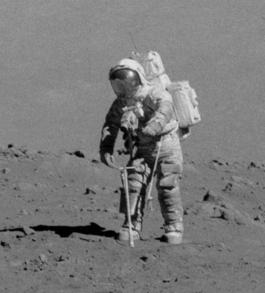 Technical Details
Sample number: 79002
Weight: 409.4 grams
Core tubes were thin-walled stainless steel with an inner diameter of about 4.1cm. The length was about 34cm so as to fit in the Apollo sample return container (ALSRC), but this one was returned in a sample bag.