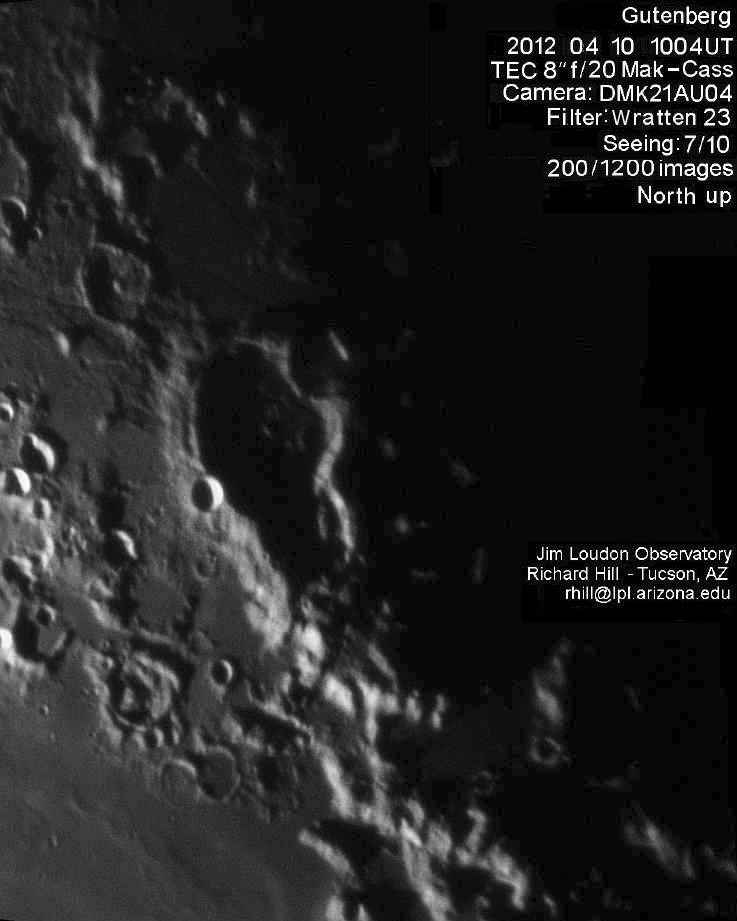 Rik has a great new telescope and is exploring features that are off the beaten track of most imagers. This view of the irregular isthmus between Nectaris and Fecunditatis catches the last illumination to warm the walls of Gutenberg before two weeks of hypercold. I can imagine that some future lunarians would be lining the crater's rim crest enjoying the sunset and collecting the last gasp of photons on the solar panels that power their sub-lunarian world. A hundred years ago the astronomer Pickering used to think he saw insects and plants that followed the Sun on crater walls, so my imagined lunar settlers are really not much different. Peaks like those on the crater floor and further east into the terminator will be the best places for solar panels for they catch the first rays of the rising Sun and hang on the longest when it sets. Of course the Sun moves around the lunar sky so the panels would need to cover all sides of a column - like the carvings around Trajan's Column in Rome. But more elegant would be a column with solar cells on just one side, that would rotate around its vertical axis so that the panels always point toward the Sun whenever it was visible. Perhaps the differential pressure of the photons across the panels could propel it around, assuming frictionless bearings - keep the dust away - so no energy would be siphoned away for motor drives. Or being inspired by Pickering's plants perhaps the biomechanism the keeps sunflowers pointed toward their namesake could be replicated in organic panels that both harvest photons and automatically turn toward their source. Can you tell that I'll be glad when the Moon is back in the evening sky? And when I receive more great images for LPOD?

Technical Details
Details on image; Registax6 and Irfanview used in processing the images which were combined with AutoStitch.

Tomorrow's LPOD: Another Off the Beaten Track Place