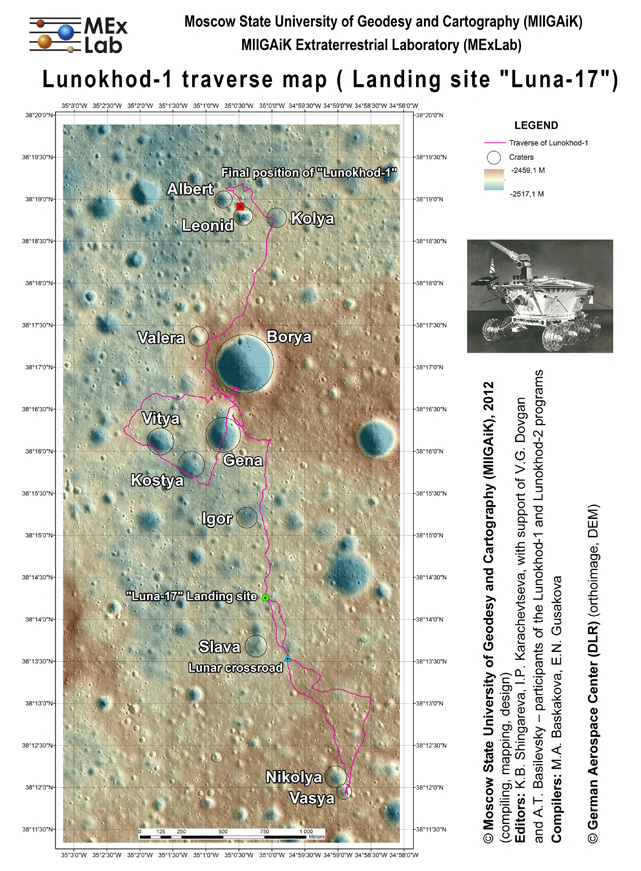 Luna 17 landed on the lava plains southwest of Prom. Heraclides, just south of Sinus Iridum on Nov. 17, 1970. Twin ramps rotated to the surface, and Lunokhod-1, the first remote-controlled rover on another world, was driven down a ramp to begin a new era in planetary exploration. The rover was driven by two changing crews from a control room of the Deep Space Communication Center at Shkolnaya Military Base (west of Simferopol, Crimean Peninsula, Ukraine). Each crew included five persons: commander, driver, navigator, board engineer, and operator of the rover's high-gain antenna. These teams drove Lunokhod-1 for ten (Earth) months, traveling 10.5 km and exploring craters, measuring regolith properties and determining the chemical composition of 25 soils. Scientific reports were published after the mission but as time passed it became more of a historical note than a scientific research topic. That changed in March, 2010 when keen-eyed scientists with the Lunar Reconnaissance Orbiter Camera team discovered the tracks, the lander and the rover itself. Exact knowledge of where Lunokhod traveled and detailed knowledge of the features it studied means that the measurements made 42 years ago can be reinterpreted, with improved understanding sure to follow. In order to facilitate communication when discussing the Lunokhod-1 data the International Astronomical Union's Working Group for Planetary Systems Nomenclature has just approved 12 names for craters visited by the rover. These craters are all small - between 100 and 400 m in diameter - and following IAU policies receive first names, unlike larger craters whose names commemorate specific scientists. It isn't often that new names are given to lunar features, so Borya, Slava and the other ten will have to be added to the Moon-Wiki for it to maintain its status as the most comprehensive resource on the planet for named lunar features.

Chuck Wood
Thanks to Irina Karachevtseva for providing this image!

Related Links
Rükl plate 10
A larger version of the map.


Yesterday's LPOD: Why the Rille Turned