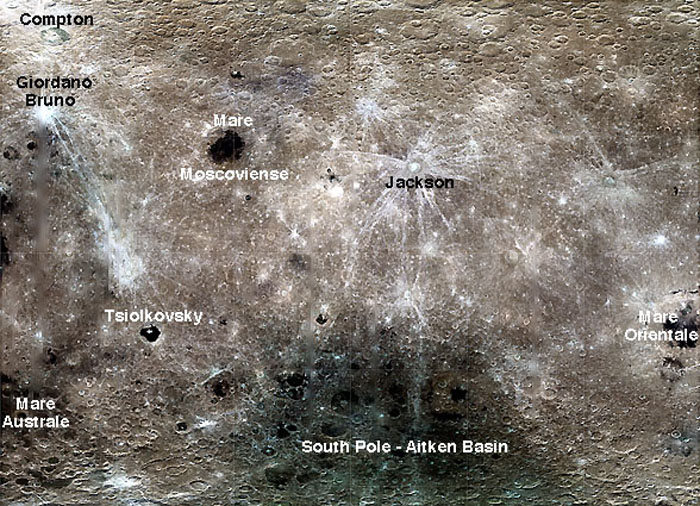 image by Mark Robinson
This is a repeat of a classic LPOD from April 7, 2004.

This alien landscape is not one of the satellites of Jupiter - it is the out of sight, totally out of mind farside of our own Moon. Kepler wrote a science fiction story, Somnium or Dream, about a trip to the Moon. He called the farside Privolva, which meant "Out of Sight of Earth". Privolva doesn't look like out familiar nearside. There are few dark maria deposits - the lack of such a pattern makes finding your way around difficult. The farside is essentially the nearside's cratered highlands expanded to fill a hemisphere. There are a number of rayed craters, including Jackson, whose asymmetric ray pattern resulted from an oblique impact. But the main feature of Privolva is the huge darkish circle in the southern part of the image. This is the 2500 km wide South Pole - Aitken impact basin, or as I like to call it, the Big Backside Basin. Although there is some dark-hued mare material inside the BBB, the coloration is thought to be due to the excavation of lunar mantle rocks that are noritic in composition. Norites are igneous rocks that include roughly equal amounts of two contrasting minerals: bright plagioclase feldspar and dark iron and magnesium rich pyroxene. Having lunar mantle rocks at the surface makes the BBB a prime target for future sample return missions.

Technical Details
This remarkable mosaic was constructed by Mark Robinson using Clementine images taken in three wavelengths: the 950 nm mosaic is displayed as red, the 750 nm mosaic as green, and the 415 nm mosaic as blue. Each coloration on the image above can be related to lunar surface composition, with the light blue color representing the youngest, impact-created glassy rocks. High resolution images of the near and far side color mosaics are available at Mark's web site.


Yesterday's LPOD: Pieces of the Moon for Maxi