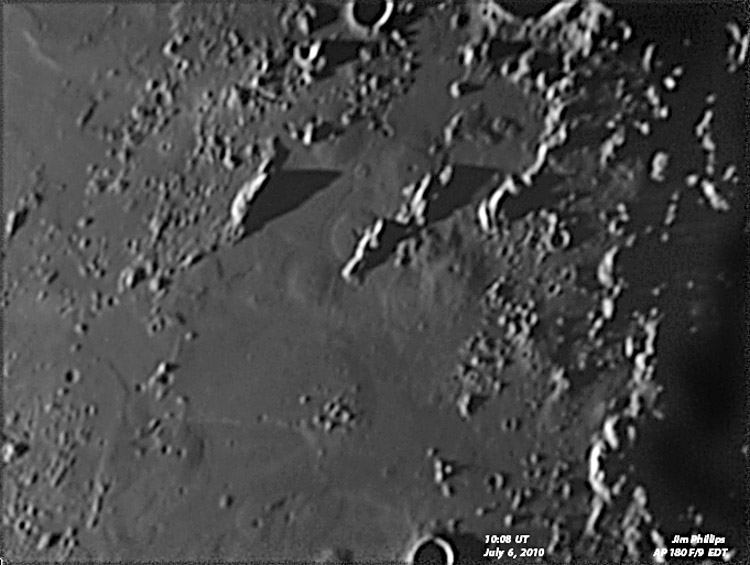 Jim Phillips is a master of the deep terminator, pulling details almost from shadows. And he has been studying lunar domes longer than many of us have been looking at the Moon. Here he brings these two passions together with this image of the domelands between Tobias Mayer (partial rim crest at upper right) and Milichius (just left of July 6 date). Three broad, flat-topped domes make a conspicuous line near the center of the image. From top to bottom these are M3, M5 and M1 in the Geologic Lunar Research group's Consolidated Lunar Dome Catalog. The Catalog gives the dimeters and heights of these as 15.6 km, 190 m; 15.3 km, 80 m; and 13.4 km, 100 m. I am sure the careful GLR workers are correct, but the prominence of M5 suggests that is is taller than M3 and M1 - I guess that is why measurements are made! A very strange looking flat-floored, wide rille parallels the curvature of M5 and M3. The word rille is correct but the interpretation of the feature being a wide rille is wrong. Higher resolution from Lunar Orbiter IV reveals that this T.Mayer Rille is quite narrow. In Jim's image we only see the slight shadow cast by its western wall and don't see the eastern thin bright rille rim catching the Sun. Long ago Gerard Kuiper noticed that the rille bends around the dome, allowing the relative ages of the two to be determined.