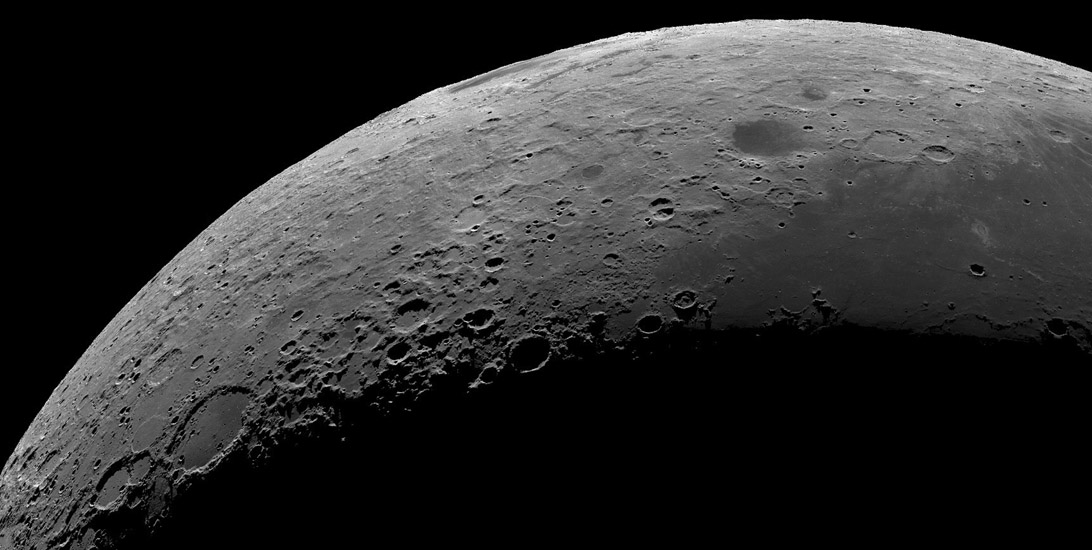 This piece of a crescent image from July 7 provided by Maurice, shows wonderful detail from Shickard and friends near the terminator (bottom left) to Orientale on the limb. Sadly, it was cloudy in New Zealand when this image was made, so it isn't from a telescope and camera but from a topography datafile and a computer. Maurice created this image inside his house on a night when the sky wouldn't cooperate. He used the high resolution digital topography model data (DTM) from the Lunar Reconnaissance Orbiter LOLA instrument, overlaid with Clementine albedo information, to generate a great view of the Moon he couldn't see. This image is reduced from what he submitted, and at full resolution the spacing between data points causes the image to become slightly blocky, evidence of its database heritage. But LOLA is adding 2 million new altimetry points every month so that by the end of the LRO mission the DTM will have higher resolution than any possible telescopic image from Earth. Will imaging from Earth die? Should it? If all we want is a high resolution view of lunar landscape under any possible illumination and libration condition, the answer may be "yes". But it there is a concern to look for transient events, such as meteor impact flashes or putative degassing, obviously the answer is "no". And if the goal is personal understanding and exploration of the Moon and the challenge of mastering imaging skills the answer is "absolutely not". These questions are similar to those that painters on Earth faced more than 100 years ago when photography became incomparable in capturing detail. Telescopic observing and imaging, like painting, are personal pursuits, with images resulting from personal decisions on how to depict a scene. For science, a DTM constructed image may be adequate, but for art, personal pleasure, and simply the thrill of working with photons from another world the telescope, camera and eye are unsurpassed.