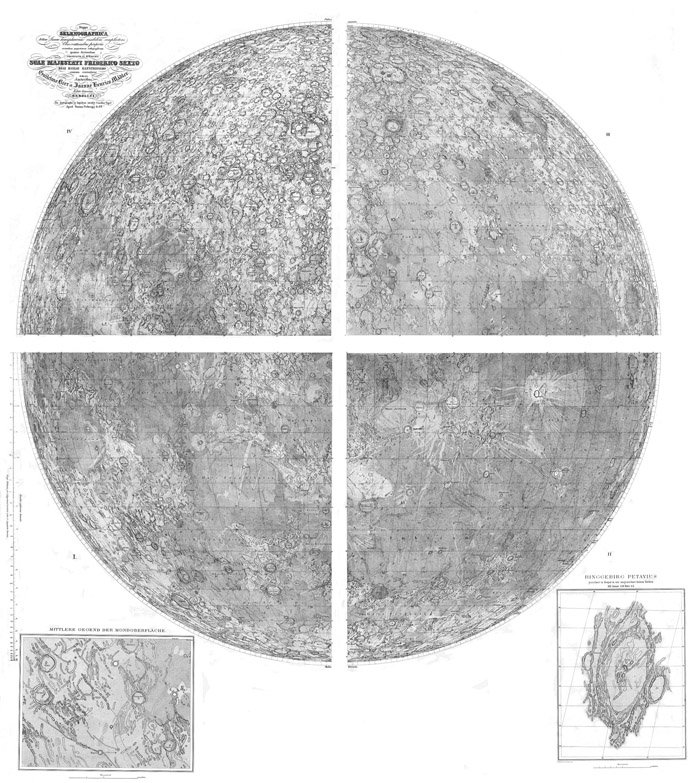 The most influential lunar map of the 19th century was still on display at Steward Observatory when I arrived at the University of Arizona in 1960. It is difficult to conceive that Apollo, LRO, or other modern results will still be used when they are 125 years old. The Mappa Selenographica by Beer and Mädler was published in 1834-6, and immediately transformed lunar studies. The map was far more complete and accurate than any that preceded it, and the text of the companion volume remained the last word on lunar science for decades. The map was the basis for modern nomenclature, with the introduction of systematic labeling of peaks, rilles and satellite craters. But time passes and old classics become nearly impossible to find, and certainly to afford if found. Enter Peter Grego, who has been reproducing classic lunar maps and selling them on eBay for reasonable prices. The B&M four quadrant maps cost $10.62 (plus another $10.62 postage), being printed with a lunar diameter of 43 inches, about 10% larger than the original. While at Peter's store you may be tempted by reproductions of maps by Neison, Goodacre and Wilkins (all on CDs, as is B&Ms map), plus many of the USGS topo and geologic maps. For the price of a nice night out you can stock up on good reproductions of some of the most useful lunar maps ever made.