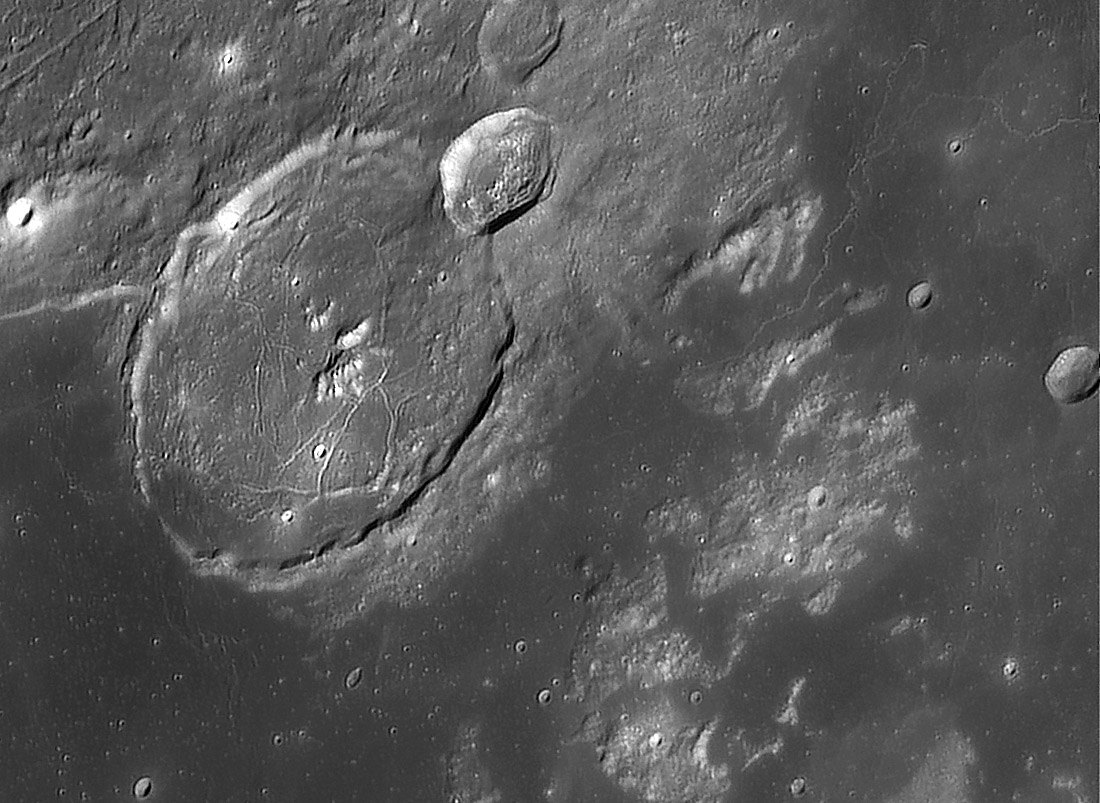 Any scene on the Moon is the culmination of many events that occurred over billions of years. Here is a quick historical tour of the Gassendi area. The oldest landform visible here may be the short piece of the once-named Percy Mountains marked by the small bright impact crater - this is one of the rings of the Humorum Basin. The hilly material to the east, north and west of Gassendi is material forcibly excavated from where the basin now is and sent as ejecta across the Moon; it is the same age as the basin ring. The next events were collisions of cosmic projectiles that made impact craters of various sizes. Many formed on the floor of the basin itself and are now covered by later lavas, but the biggest, Gasendi, impacted just inside the Percy Mountains ring. Gassendi ejecta added to basin debris. Either Gassendi formed on a slope toward the center of the basin, or the basin floor subsided after it formed due to the mass of the the early Humorum lavas, but the result was that the crater tilted towards the basin center. Widescale eruption of Humorum lavas flowed over low and tilted crater rims around other parts of the basin but the rim of Gassendi was just high enough to keep the mare lavas out. The lavas inside Gassendi's southern wall presumably came from the same mantle sources as the mare lavas, rising up fractures under the crater. More magma than erupted inside the crater was involved for the unerupted magma lifted up the broad crater floor, fracturing it with a complex pattern of rilles. Lavas also erupted from channels that started at eleongated collapse vents in southern Procellarum and flowed downhill through the Pillars (upper left) toward Humorum. These Herigonius Rilles disappear east of Gassendi. Just south of Gassendi are delicate mare ridges that are part of an inner basin ring, formed as the solidified magma pile faulted to accomodate a reducation in volume as the basin floor subsided. Impact cratering continued - as it still does - with Gassendi A smashing into the northern end of the large crater's rim at some undetermined time. Small craters dotting the maria and less visibly the basin ejecta continue to chew up the older surfaces, but at a much lower rate than 3 billion years ago.