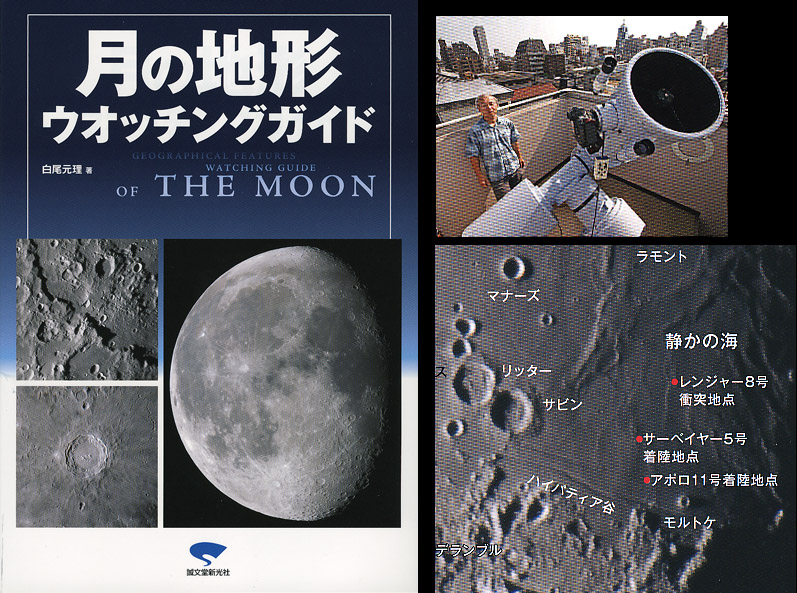 The Moon shines on all of us, yet only a handful of the nearly 200 books in my collection are not in English. Part of this reflects my nationality and limited proficiency with languages, but it also seems that there has been far more written about the Moon in English than in other languages. That hasn't always been true. In the 1600s probably Italian and Latin were the languages of choice for scholarly books about the Moon, and by the 1800s lunar studies were mostly in German. But since the late 1800s and through out the last century English became dominant. Of course, one reason was Apollo, and half of my books were published since 1969. My unintentional chauvinism is expressed by the under-representation of Russian books - I have only four - despite the great Soviet record of lunar achievements. And now I have my first Japanese book, Geological Features and Watching Guide of the Moon by my friend Motomaro Shirao. Moto was the person who selected the targets for the HDTV on Kaguya and he is also an amateur astronomer with an awesome looking telescope. He took all of the photographs, which are of high quality, in his book. I expect and hope that the recent Chinese, Japanese and Indian lunar missions will spur the publication of more books about the Moon in the languages of those nations - and I hope I can promote them on LPOD. For awhile LPOD was translated into French, Spanish and Russian - perhaps this new interest in the Moon by additional nations will lead to versions in languages of the future.