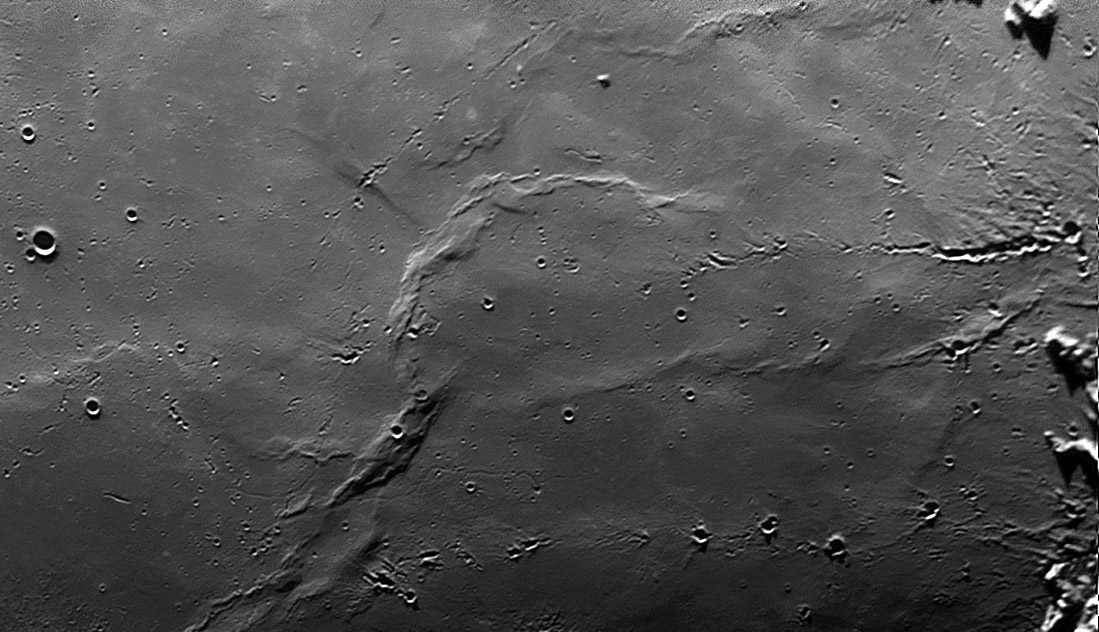 The three geologic processes responsible for forming most of the Moon's surface are visible in this patch of southern Mare Imbrium. Impact craters, both primaries and secondaries, are scattered across the scene; volcanism appears as massive mare lava flows and small craters and rilles; and tectonism threw up the mare ridges that cut across the surface. The most prominent feature is the chain of overlapping secondary craters at right center. These must have formed by chunks of rocks excavated during the Copernicus impact event that did not separate much during their short ballistic trajectory from the crater. Across the bottom of the frame is another type of secondary cratering where the separation of ejecta was great enough that individual small packets of debris typically made one large crater and a few small ones. In both cases vee-shaped patterns of ejecta roughness show that there was a strong horizontal component of velocity away from Copernicus. The lower secondary trail is typical of cratering along a ray, whose brightness is just hinted at in this low Sun view. Although there are no volcanic flow fronts preserved here - as they are nearby - presumably they were originally, but small scale cratering has eroded the fronts away. The largest discrete volcanic feature is the sinuous rille near bottom left - its source vent is the rimless pit at its southern end. This unnamed rille is essentially invisible on Lunar Orbiter IV, but does appear on the LRO Nearside Mosaic.Beyond the northern end of the rille is a narrow elongated rimless vent that appears to be on a round rise. Another volcanic vent on a light-hued rise is near top center. It looks like a tadpole, perhaps a very short segment of a sinuous rille. And above and to the left of it is a narrow chain of secondary craters. Who can identify its source?