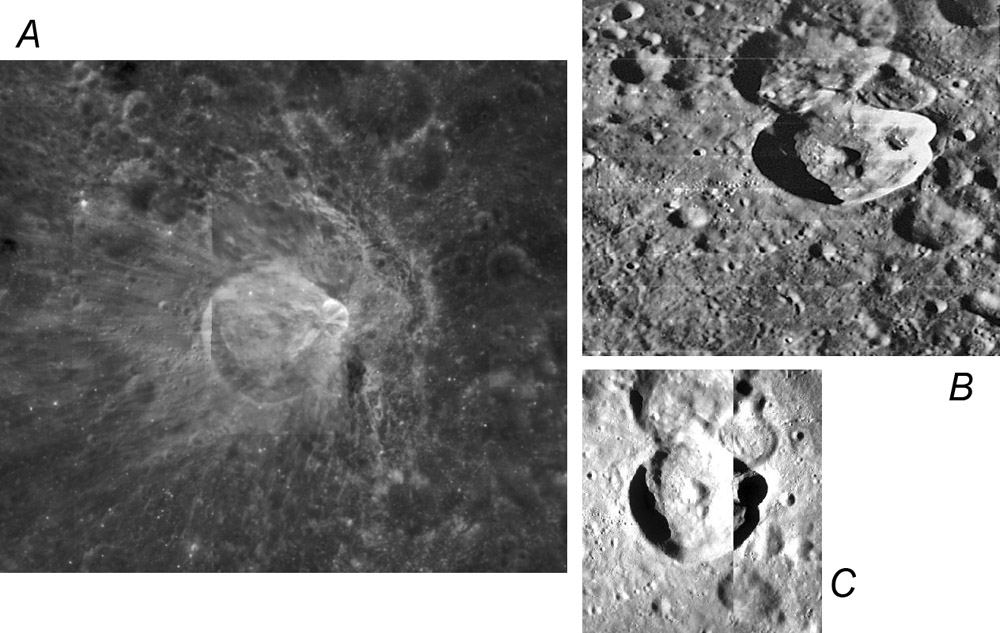 image A from Clementine (Map-A-Planet); B from Lunar Orbiter II-034-h1, and C from LRO QuickMap

While updating the MoonWiki I discovered that Jeff Moore and Alfred McEwen had once classified the farside crater Virtanen as Copernican in age. This is the youngest age class and is limited to craters that possess rays. Moore and McEwen had seen rays on the then newly available high Sun Clementine image. But that image shows that the rays aren't from Virtanen itself but from a younger lopsided crater that formed on Virtanen's steep inner rim - image A above. All of the brightness and rays extend to the west/left of the rim crater so it could have formed by an oblique impact from the east. But that may not have been necessary to explain the spray of ejecta toward the west. Perhaps even a vertical impact formed on a steep slope will vent ejecta in the downslope direction. I decided to investigate the crater more but found little satisfaction in either the old Lunar Orbiter II image (B) or the newer LRO one (C) which has an infelicitous seam boundary. It is rather amazing that despite nearly 50 years of imaging from lunar orbit there are still some places, largely on the farside, with inadequate image coverage. I assume that LRO will gradually clean up all bad seams, and someday will dazzle us with a high Sun and high resolution global mosaic.

Update
In googling Virtanen I found Joel Raupe's article with an excellent LRO image of Virtanen. This is tagged as an ASU image but I couldn't find it on the LROC Featured Image page.

Tomorrow's LPOD: Coming Out of the Nebula