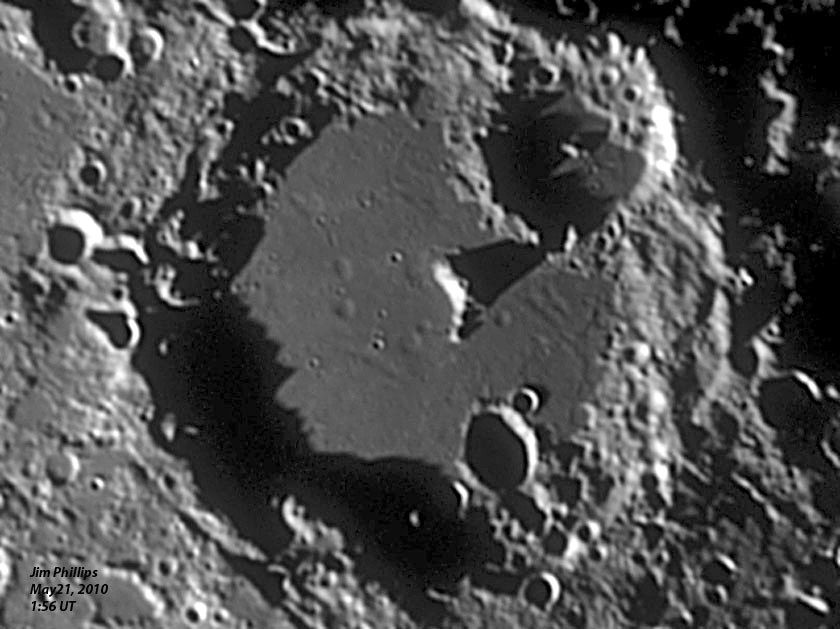 south up image by Jim Phillips

Jim is a Terminator Ranger, sleuthing along the day-night line, looking for hardly known micro perturbations of elevation. Usually he searches for little domes, but this time its not bumps but dips that he has found. We have seen these before at higher, and similar, illuminations, but each time seems like a new revelation. Like the saucers on the floor of nearby Ptolemaeus the usually invisible dips in Albategnius are earlier-formed craters that were nearly completely buried by the crater floor smooth fill. Three or four of the floors crater chains are oriented nearly parallel to the Imbrium sculpture - one piece prominently seen at bottom left - implying that those pits are small secondary crater chains from the formation of the Imbrium Basin. The smooth floor-filling is almost certainly a slightly later arriving phase of ejecta that was not individual rocks but a flow of fluidized debris that made nearly level surfaces. This tells us something about the sequence of material thrown out during basin formation. Perhaps early in the process there were excavated blocks from the digging of the depression, and later material that had been pulverized and infused with lunar gases so it acted almost like a fluid. Back from the speculation to the surface - notice that Klein also has some mini-depressions on its smooth floor. That means that Klein also formed before the Imbrium impact.