50 Years Later - not Forgotten, not Confirmed 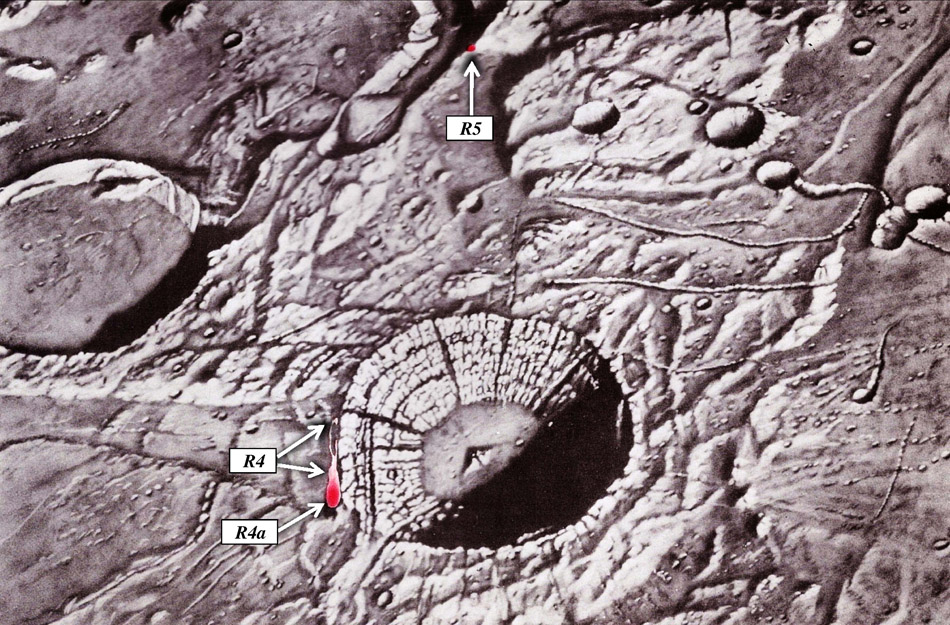 Patricia M. Bridges produced this detailed illustration of the positions of Greenacre, Dungan, Barr and Hall's November 27, 1963 observation (marked in red) with a great deal of input from Greenacre and Barr.

Today marks the 50th anniversary of the Greenacre-Barr observation of reddish spots on the Aristarchus Plateau through the Lowell Observatory 24-inch Clark refractor featured in the August 25th LPOD. November 27th marks the anniversary of the second Lowell TLP observation. Over the past 50 years, attention has focused almost exclusively on the first night’s 25-minute observation, the veracity of which has been challenged based on the Moon’s altitude (25-29 degrees), poor seeing and Clark optical aberrations. However, the November 27th observational conditions were more favorable during a 75-minute event presenting its own set of observational anomalies. As the Moon rose no anomalous colors were seen until the Moon was at least 25 degrees high and various color effects remained this time until a much higher altitude of 39 degrees. These TLP were observed under seeing conditions that became mostly "excellent" for Jim Greenacre, Fred Dungan, Ed Barr and Lowell Observatory director John Hall. There was an idiosyncratic delay in the appearance of R4a which only began to form and increase in brightness 15 minutes after the appearance of R4. Lack of anomalous color elsewhere is notable despite checks for such effects, and of course chromatic optical aberrations should have been always present. The two nights limited duration colorations make it frustrating to neatly apply the optical/ atmospheric hypothesis. As John Hall noted "Contention made here is that this coloration is not produced in the optics of the telescope or in the Earth’s atmosphere". If either night’s TLP color was terrestrially produced, it should be possible to duplicate the observations with digital imaging under repeat illumination conditions and resolve this 50-year old mystery. We challenge readers to try this – see our web site for further information and in particular the supplement "Repeat Illumination Observations for The 1963 Aristarchus Events".

Bob O'Connell and Tony Cook
CAW note: The lighting conditions can be repeated but not the seeing conditions of 50 years ago. Unlike some TLPs that illumination conditions may explain, this is a case where seeing and the chromatic aberrations of the 24" are possible contributors to the phenomena.
CAW second note: Hidden away at the bottom of the Aristarchus Events website is a treasure trove of historical publications about the Moon. Bob has scanned all of the Strolling Astronomer/Journal of the ALPO articles about the Moon, starting with volume 1, number 1 in 1947. This is probably the most comprehensive collection of American amateur lunar observations and will be invaluable for any serious studies of amateur interests and for casual browsers. I especially like the early covers that included sketches of telescopes, rockets and planets. I also noticed the many contributions of Dr. Bartlett, who used a 3.5" reflector to make controversial observations. Thank you, Bob!