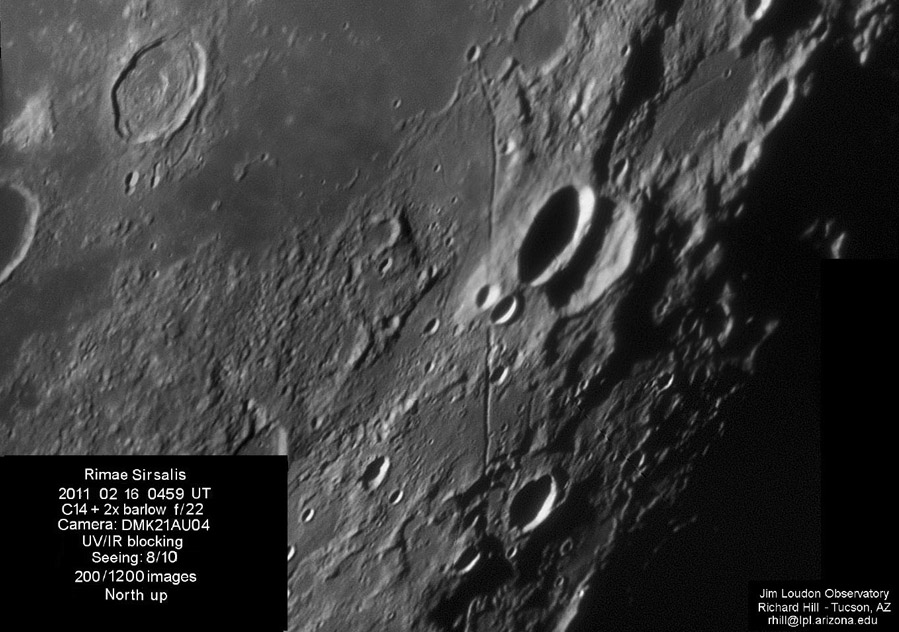 The Moon has a Straight Wall and a Straight Range, why not a Straight Rille? Other than a deflection along a crater wall at its top end, the Sirsalis Rille looks like a draughtsman could have laid it out with a sharp pencil and a straight edge. But why would a rille be so straight? Unlike sinuous rilles which are created by lava flowing in a channel on the surface, straight rilles are thought to be the surface expressions of rising vertical slabs of magma - a dike in geologic parlance - that push apart the crust being penetrated, allowing the surface to collapse into the void above the magma. Some linear rilles show small volcanic cones, illustrating that sometimes some magma does escape to the surface. Magma can most easily force its way through where the crust is already weakened. The fact that the Sirsalis Rille is just one of three or four rilles approximately radial to Oceanus Procellarum suggests that the rilles are related to the putative Procellarum Basin that the ocean of lava fills. In fact, since Sirsalis reaches all the way to the mare shore it is possible that it extends under the mare lava and was actually a feeder for it. BTW, did you notice that this image is flipped right to left? I left it that way because the unfamiliar orientation allows us to see the scene freshly.

History Note
Giovanni Riccioli, whose names on a map of 1651 are the basis of lunar nomenclature, was born on this date in 1598.