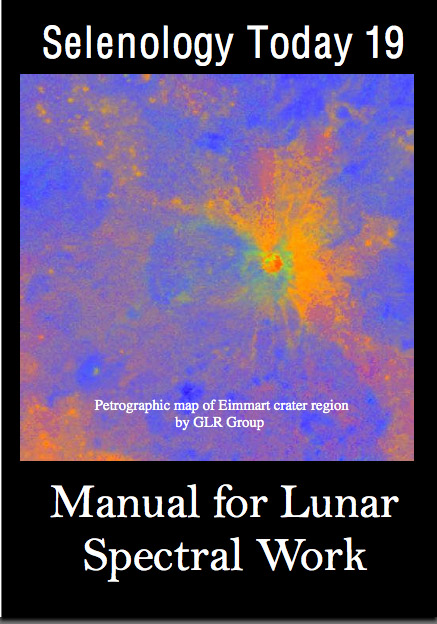 For many years amateur observers of the Moon made sketches and took photos. Other than special interest programs of the ALPO and the BAA there was little scientific analysis of what they saw. The Geological Lunar Research group has changed that. SInce issue #1 of GLR's Selenology Today they have promoted serious scientific investigation of the Moon. Much of the earlier work concerned topographic studies of domes and faults, and more recently they have developed techniques and software for multi-spectral mapping. Now Rick Evans with help by Raf Lena and Christian Wöhler, has published a practical manual so that others can follow their lead in extracting compositional information from Clementine and Selene data. But be warned, spectral mapping requires learning about minerals and rocks whose terminology is baffling until it becomes familiar And the processing of images to deduce compositions requires many careful steps. But this is just the sort of process that many technically exuberant amateurs excel at. Congratulations to Rick, Raf and Christian!