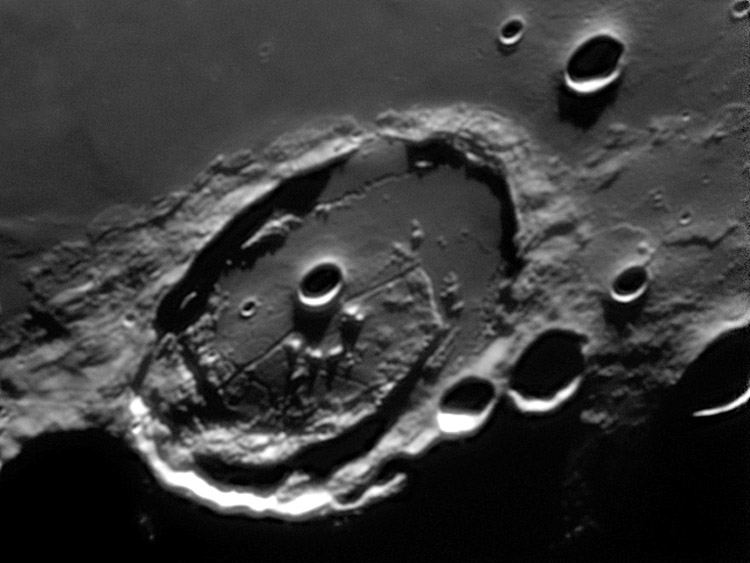 Posidonius is one of my favorite craters, and every time I observe it visually, I gain increased respect for what can be imaged. As is known the southeast (bottom right) part of the floor was apparently uplifted and tilted - I assume that the angular ridge that extends from near the south wall to the east and then north was originally part of the crater's terraced wall and has been shifted away. Lavas from the sinuous rilles and other sources filled the low parts of the floor. Sean's new image provides evidence about floor topography that helps interpret two observations. The lighting indicates that the area of the floor between the largest crater (Posidonius A) and the south wall appears to be domed up like the top of just baked bread. On Earth, where such uplift occurs the stretched crustal rocks fracture, makings rifts. In Posidonius the domed region is crossed with more rilles than elsewhere on the floor, and the uplift is probably why. A second area of interest is the tiny gap in the northwest wall. Orbiter images show that the southern end of the sinuous rille becomes narrower and curves to the wall, ending at the gap. Surely lava from the crater floor flowed through the gap onto Mare Serenitatis, but I have never seen any evidence for it. I still haven't, but Sean's image may explain why the rille goes to the south before turning to the wall and edging along it to the gap. It appears that a bulbous doming exists inward from the gap, so the rille flowed south around it before moving west to the wall and flowing north.