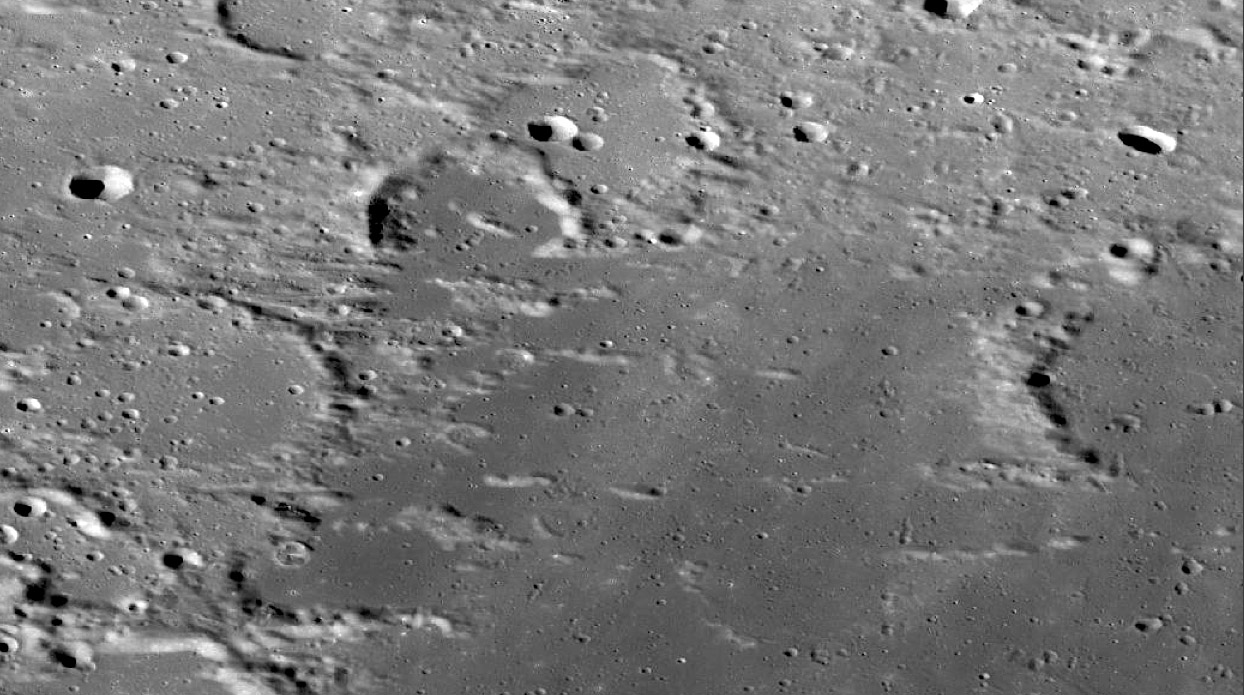 This is flooded terrain, where mare lavas flowed in and around a pre-existing landscape. The lavas buried all the lower levels and the fascinating thing is that the high land is all linear ridges. Clues to their origin come from the eroded crater near the right edge - it looks like it was scoured by something, leaving gullies and interspersed ridges. The similar sized crater near the left margin shows the same thing, and near the bottom center are a series of low ridges that define about half a circle - all that remains of a crater rim. Looking further west along the trend of these ridges reveals a series of linear troughs, marked with white lines on the image below. The troughs are both closely spaced craters and apparent gouges made by flying material. These, like yesterday's LPOD, are probably basin secondary chains. In this case, although the line orientations almost appear to be east-west, when looked at on a globe they are really approximately radial to the Imbrium Basin. In fact, the USGS mapped the ones of these they saw as Imbrium ejecta chains back in 1978. This is a wider ejecta swath than the one in yesterday's LPOD, and areas nearby have fewer linears. Basin ejecta, like crater rays, were not uniformly distributed but were expelled in clumps that travelled along similar trajectories. The ridges here in this northernmost corner of Oceanus Procellarum are unusual. There are some similar features on Saturn's moon Titan where wind abraded away the missing icy rock. Here it was basin ejecta that gouged it out and later lavas filled in the gouged areas.

Chuck Wood
Note: I love the new views provided by LRO but I like telescopic images too - I just haven't received many excellent ones lately. That is a hint.