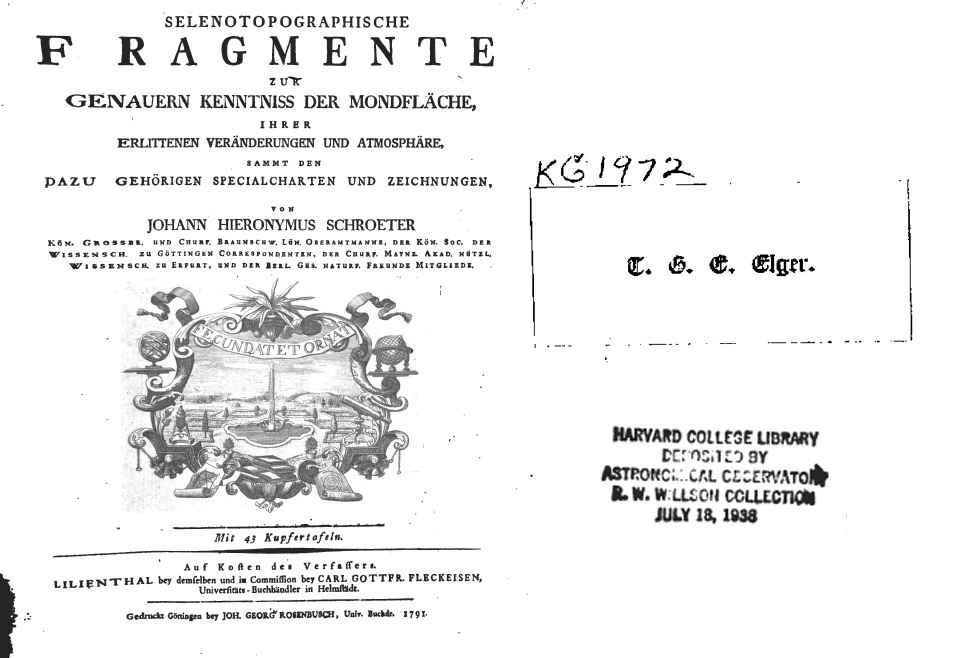 image compiled from three pages of the online version at Google

Collecting and preserving the history of lunar studies is something we should do, and it is often interesting. As mentioned recently, the whereabouts of all the papers from BAA Lunar Section director Walter Goodacre are still uncertain. I just stumbled upon some information about a book owned by Goodacre's predecessor, Thomas Elger. In this copy of Schröter's classic book Selenotopographic Fragments, digitized by Google, on different pages there are two stamps that provide information on three of the book's owners. The top stamp shows that Elger owned it at some point. Elger died in 1897, and in 1938 Schröter's book was given from the R.W. Willson Collection to the Harvard College Observatory. Who was R.W. Willson? Some googling led to the discovery that he must have been a Harvard College astronomer for the young galactic astronomer Bart Bok received a R.W. Willson fellowship when he arrived at Boston in 1929. That affiliation for Willson was confirmed in a 1919 Popular Astronomy article by John Charles Duncan that discussed Willson's method for determining the lunar orbit. Apparently Schröter's book stayed safely on the Harvard library shelf until it was scanned by Google, sometime in the last six years. The digitization was a non-destructive process and the book still appears in the catalog of the Harvard library so I suppose it is still on a shelf in the rare books collection there. I enjoyed this evening quest, especially since I had met Bok and Duncan when I was a student at the University of Arizona in the 1960s.