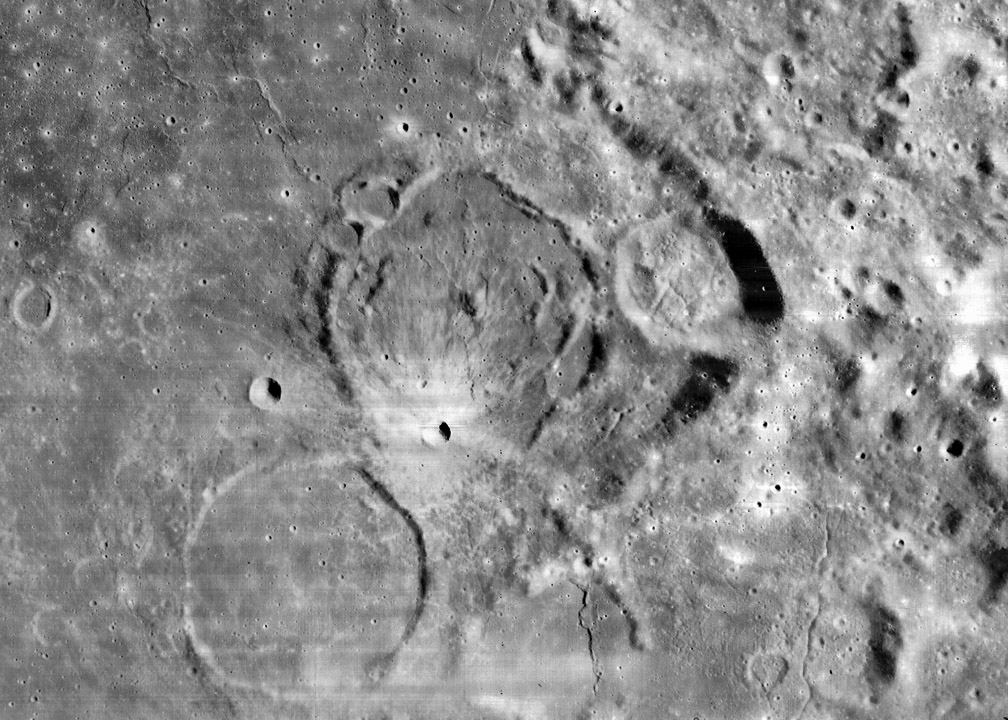 Here is a little known area with interesting craters that lack names*. They do have letters: Purkyne S, U and V. Purkyne is an unexceptional crater just over the eastern limb past the eastern edge of Mare Smythii. S is the large flat-floored at bottom left. U is odd feature with a small bright ray crater on its southwest rim. And V is the crater just to the right of U with the floor cross-cut with hills and fractures. U and V are mostly contained within a larger, older crater with a well defined rim on the eastern side, and a short curved ridge on the west may be a piece of its rim. Mare Smythii is strangely full of floor-fractured craters; V qualifies with its uplifted and jumbled floor, and the short rille just inside the southern rim of the large unnamed crater suggests that it too may have been. U is weird. There is a central peak suggesting original normalcy, but the multiple rims are decidedly odd and the mare fill there and to the south has a number of small sharp-edged (there is a shadow even though its high Sun) ridges. The distribution of rays around the small bright crater seems to have a narrow zone of avoidance to the east suggesting that it might have been an oblique impact. But the detailed topo map shows that one of the ridges of U may have diverted the rays. More interesting is that the south side of the ray crater wall is 100-200 meters higher than the north side. This may explain the ray distribution shown on high Sun images. Normal linear rays extend to the north, but on the south there are no long rays, instead there is a network of irregular thin bright lines. It appears that the high southern wall broke up the ejection of what would have been rays and fragmental material rained down close to the crater.

Related Links
Rükl plate IV
I thank Danny Caes for pointing out some features on others of the Orbiter I images which got me looking at these.

Yesterday's LPOD: Not What You Think

(1) Chuck--The lettering you refer to for features seems to be missing. --Bill

The letters Chuck is referring to are the official names of these craters. Although not geologically related to Purkyne, they are regarded as satellite features for locational purposes, and each is assigned a letter.

(3) Chuck -- Although Jennifer Blue's USGS Digital Atlas page (PDF) for this zone does indeed identify Purkyne U as the smaller 40-km ray-splashed crater with the central peak (see upper left corner of PDF page), the official IAU center and diameter (0.7°S, 91.9°E, 51 km diameter) -- if plotted over the LTO – clearly seems to designate what you call the larger, older unnamed crater with Purkyne V on its east rim. The 51-km figure seems a bit small (57 km would fit the LTO better), but the center of the IAU's Purkyne U neatly matches the center of the older crater (and definitely doesn’t match the center of the ray-splashed one). Moreover, the official circles for U and V overlap pretty much as shown. Since this is not on the list of questionable names that Jennifer ironed out with Ewen Whitaker, and since the PDF maps are supposed to document the current Gazetteer, it looks like the placement of Purkyne U on the PDF may be one of her few mistakes. I'll let her know. -- Jim

(4) Update (April 8, 2008): Jennifer confirmed that the position and diameter listed for Purkyne U in NASA RP-1097 (the basis for all satellite feature listings in the IAU Planetary Gazetteer) seemed to match the larger crater, and was about to correct the map when Ewen Whitaker (one of the authors of RP-1097) reported back that the position and diameter given in his book is in error, and the listing for Purkyne U was intended to refer to "the smaller crater lying west of V, not the old ring encircling V and the true U." On the basis of this, Purkyne U has been added to the list of questionable names, and the IAU database will eventually be updated to give coordinates indicating "U" is the crater described in this LPOD -- the smaller one labeled "Tasso" on the LTO. The best current estimate of those coordinates is 0.744°S/ 91.650°E with a diameter of 39.5 km. -- Jim