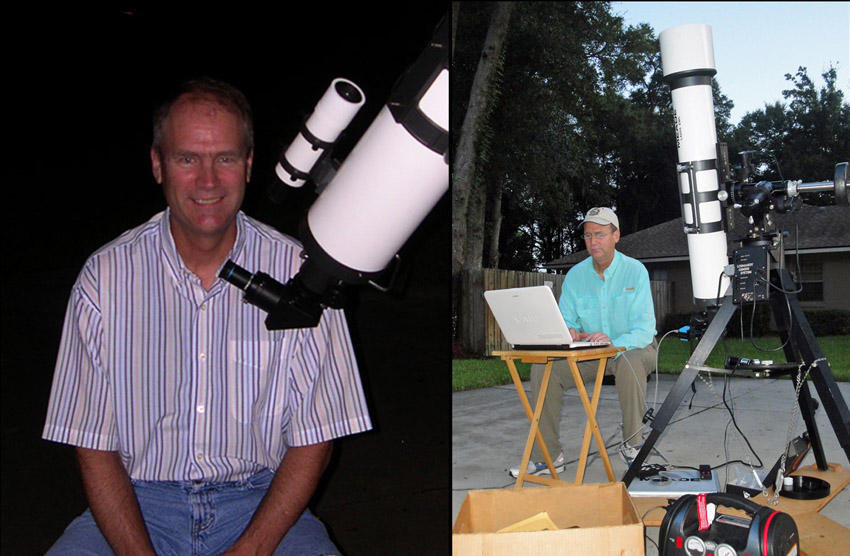 Chuck Wood writes: In more than 2000 LPODs there have been only a dozen or so devoted to the people who study the Moon. Yet not a single image would exist, nor would any spacecraft orbit, nor discovery be announced without the hundreds of people since Galileo who have been passionate about the Moon. Howard Eskildsen is a good representative of the professionals in other fields - Howard is a physician - who bring an intelligent and methodical approach to their study of the Moon. Here is an introduction to how he became a lunatic, in the best sense of the word, and more information is available. Howard writes:

Along with the stars and Moon, I was also fascinated by rocks, microscopes and telescopes. The later two were portals through which I could see the "invisible," and my rock collection led to a strong interest in geology. I read everything I could get my hands on about geology, stars and microbes, but eventually it was the microbes that picked my interest in medicine. Through the course of time I became a physician and completed a family practice residency, and am currently practicing in central Florida.

In high school I did manage to salvage a sadly abused 4.25" Dynascope and get it back in working order. Later, while in medical school I finished the 6" mirror that I had started in junior high and spent whatever free time I could watching the sky. Professional and family responsibilities, however, allowed little time for observing, so it was put on the back burner for over 25 years. In 2001 I decided to get a better scope that would be easier to grab and go out to observe when possible, with the Moon as the primary target in mind at the time. I had seen an 80 mm refractor in a local store, but my wife suggested spending a little more money for a better one and bought me an ETX-125 for Christmas. It worked well for my needs at the time. One night I had to heartily agree with a grade-schooler who had looked at Venus and the Moon through it, asked where I got the telescope, then exclaimed. "Wow, you sure are lucky to have a wife who buys you luxury telescopes!" In the years that have followed I have observed and photographed the Moon with a 6" refractor that I purchased from Jose Olivarez and have read as much as possible about the Moon. I have submitted over 1,000 images to the Lunar section of the Association of Lunar and Planetary Observers and have written articles and provided images for Selenology, Selenology Today, The Lunar Observer, and theStrolling Astronomer. I have given lunar presentations at the Winter Star Party as well as at the Alachua Astronomy club, and the Kika Silva Pla Planetarium in Gainesville, and have met several other talented observers. The Moon is a wonderful friend and companion to the Earth and its residents. Hardly a day goes by that someone does not hear me say, "Oh! Look at the Moon." It is like Earth’s little brother, and a rocky soul mate to all who dwell here.


Yesterday's LPOD: Everything is Self-Evident - Maybe