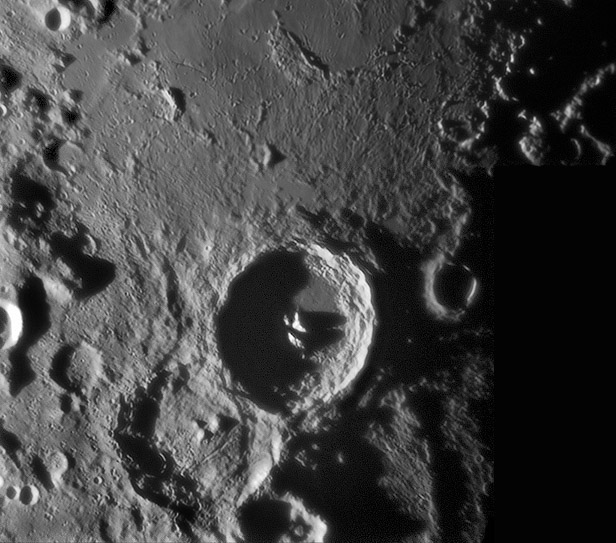 Stefan’s low Sun view of Theophilus shows many features uncommonly well. The exterior of the crater contains three types of deposits all ejected during the impact formation. Beyond the crater rim, low ridges radiate away - this is called the continuous ejecta deposits. Near the outer parts of that are secondary craters that overlap and some have hints of vee-shaped ridges that point back to Theophilus. Just north of the rim of Theophilus are flat gray ponds of impact melt. By looking at the overlap relations of these three types of ejecta deposits you should deduce that the ridges were emplaced first, followed by the secondary craters and the impact melt. Because there is no overlap between the secondaries and the melt it is not clear which came first. Impact melt probably also occurs on the flat floor of Theophilus. Immediately southeast of the crater is ejecta-scoured Mare Nectaris. Stefan’s image shows the northern portion of a linear ridge that stretches from Theophilus to Beaumont. Perhaps this ridge is part of the inner ring of the Nectaris Basin, but its straightness has always been surprising. Now the long shadow it casts shows that it is probably steeper and taller than normal mare ridges.