King of the Farside 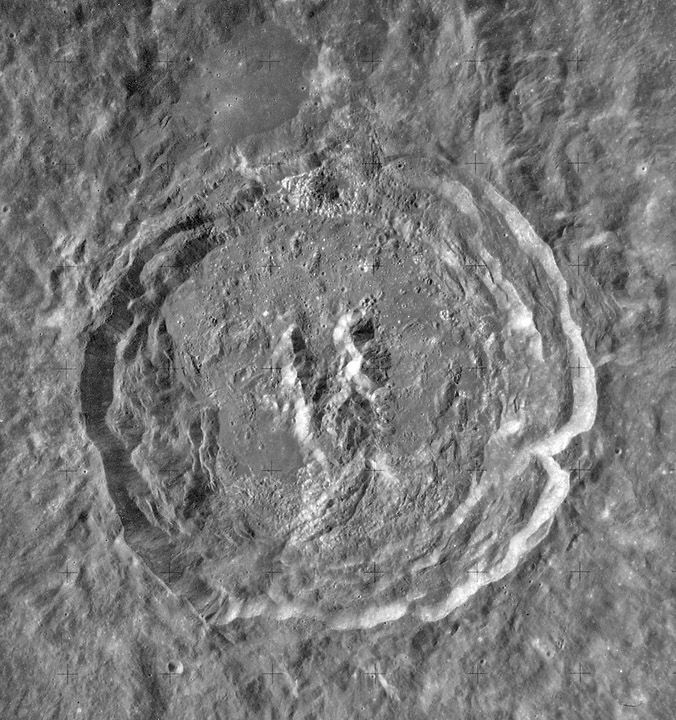 King is one of the youngest large (77 km diameter) craters on the lunar farside. From Clementine images it appears that King is in a ray system, but it is not clear where the rays originate. King’s very fresh terraces convincingly show how wall rock cascaded downslope, mostly as giant arcuate blocks, and as rubble piles near the crater floor. The lobster claw-shaped central peak may simply be a roughly circular peak whose southern edge was overlapped by a massive lobe of slumped wall rubble. To the north (top) a pre-existing crater is full of a smooth dark material. During the Apollo period it was sometimes thought that this smooth material (which is also on the bottom left part of the crater floor) was volcanic, but it is now regarded more likely to be rocks melted by the energy of impact. [Similar, but smaller ponds of impact melt are visible telescopically to the north of Theophilus.] Notice that the northern rim of King is not as well defined as most of the rest of the rim, and LTO charts show that the north rim is 2.5 to 3 km lower than most other parts of the rim. King was probably formed by an oblique impact, with the bolide coming from the south. This might account for the N-S alignment of the central peaks, the deposit of rubble from the south rim onto the central peaks, the low northern rim, and the pond of impact melt to the north.

Yesterday's LPOD: On the Beach