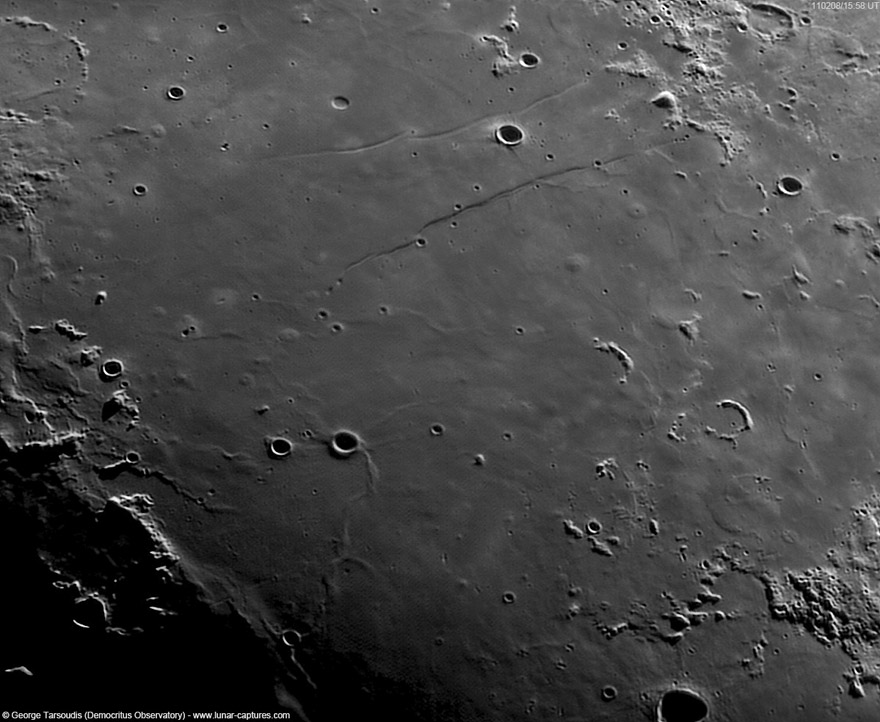 One of the richest dome concentrations on the Moon is in the region south and west of the Cauchy crustal fractures. Recently, it has been proposed that this broad area is a giant shield volcano, formed where stresses related to the Serenitatis Basin created opportunities for magma to rise through the entire lunar crust. This model may or may be correct, but George's new image shows that there are more domes here than have been cataloged - see his comparison with the GRL Dome Catalog. And it also shows that some of the domes have a different reflectivity than surrounding mare. There is a mottling of the surface with sharply bounded slightly lighter splotches surrounded by darker mare material. The most remarkable albedo - dome example is beyond the western (left) end of the Cauchy Fault. If this were a volcanic feature in Hawaii we would interpret the dome as being either a different composition or altered so that the surface texture and maybe composition had changed. Some of these domes do have different spectral signatures - appearing to be kipukas of older lava rising above a thin covering of younger lavas of a different composition. But not all the domes have a different composition, and not all look lighter in George's image.

Chuck Wood
PS - My eye is deceived by perhaps chance alignments into thinking that the Cauchy Rille extends into the battered highlands at upper right. Are your eyes deceived too?

Tomorrow's LPOD: A Flash in the Night