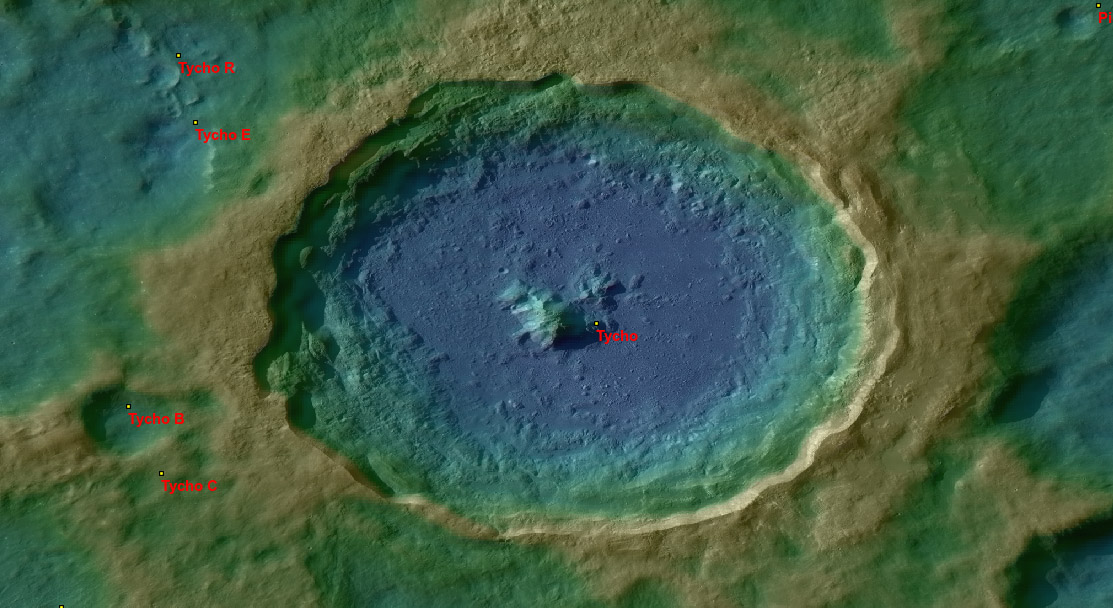 LRO WAC mosaic + LRO stereo-derived topography (in color) + lunar nomenclature database. Which one is out of date? Note that the dot marking the center of Tycho, and some of the dots for lettered craters aren't at the centers of the craters. Either the coordinates recorded for the designations are systematically off, or the coordinate system used for the mosaic and topography is different from that used for the nomenclature. The latter is likely because the the new LRO products are using - I think - a newly evolving position control network being developed by measurements of positions on the LRO images. And the nomenclature database coordinates, originally derived from the a control network based on telescopic photos, is not as accurate. The IAU nomenclature group at the US Geological Survey in Flagstaff is updating coordinates of named features. A map such as this is very useful in identifying which ones need correction. And it is easy to look at! Unfortunately there is no scale bar that tells what elevation each color corresponds to, but there are interesting things to notice without it. The base of the highest, tan, color is just at the bottom of the top scarp around much of Tycho's rim, showing thatthe scarp is about the same height. But on the western side the boundary between green and tan is higher, suggesting that the rim is lower on that side. That is consistent with the scallops cutting into the western wall and the wider area of debris on the crater floor there. Apparently, the originally higher rim on the west collapsed, takeing bites out of the rim and making a broader debris field. We should have been able to guess that the west rim was lower without seeing the topography.


Yesterday's LPOD: How Dark Was It?