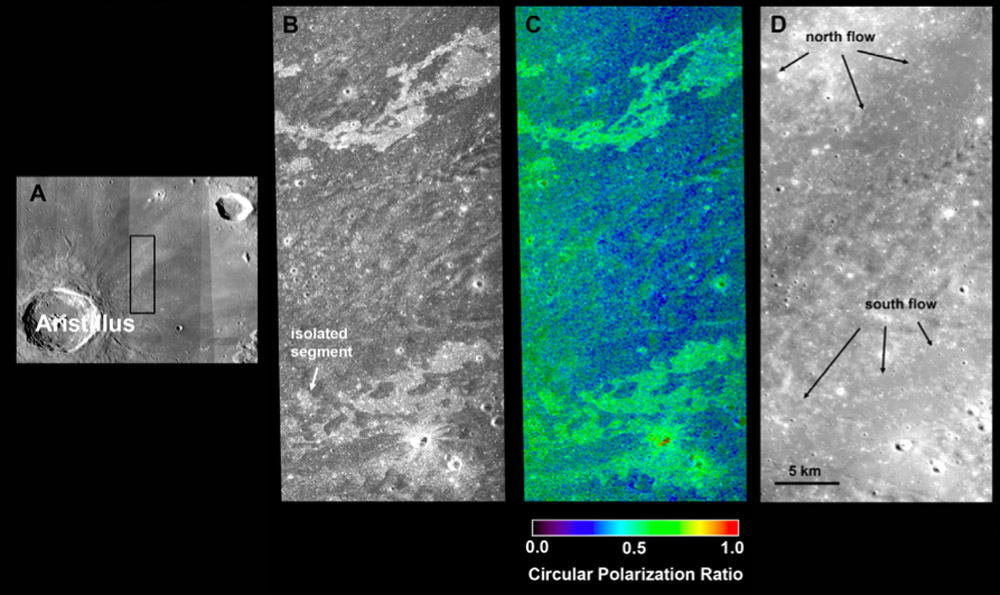 image from Carter and colleagues (2012)

Some evidence suggests that Aristillus formed from an oblique impact. But Lynn Carter and colleagues have just published an article which demonstrates that what happened may be more complex. The Mini-RF radar on the LRO spacecraft sees the Moon differently than the cameras do. Cameras record the reflectivity of the top microns of surface material, but the radar penetrates about a meter into the surface, detecting materials with different physical characteristics. The LRO WAC mosaic above (A) outlines the area shown in the subsequent image strips. The radar image (B) reveals very clearly ponds and flows of impact melt that are essentially invisible on a visible light Kaguya Terrain Camera image (D). The colored image (C) adds to the radar view a mapping from the polarization of the reflected radar signal which depends on the surface roughness at the centimeter and tens of centimeter scale. The green color shows that the flows have a rough surface at centimeters scale, which is much smaller than even the hyper-resolution LRO NAC imaging. And the fact that the roughness is in the green zone of the polarization rather than the yellow or red, like Tycho's melts, is consistent with Aristillus being more than twice as old as Tycho and thus the impact melts are optically hidden beneath a thin veneer of regolith. These melts do show that some ejecta was thrown to the northeast out of Aristillus, but much larger amounts of larger scale ridges and grooves of ejecta went in orthogonal directions. If Aristillus formed from a relatively high angle (say 25°) oblique impact there would be some ejecta in all directions, but most to the sides, just as we see. Finally, the upper lobe of melt shown in (B) and (C) is about in line with the dark bands on the wall of Aristillus that were suggested to be impact melt - that seems more likely now.