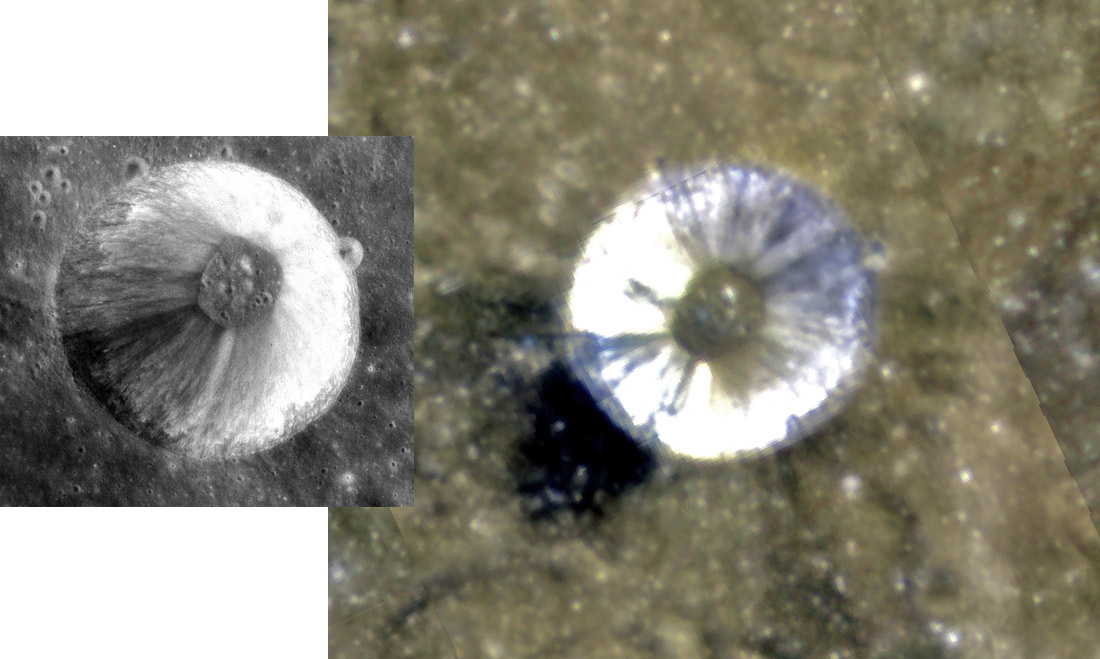 Recently the Apollo Image Archive at Arizona State University featured a high resolution Apollo 15 Metric Camera image of the small bright crater Langrenus M. This is a relatively fresh, 17 km wide crater just limbward of Langrenus. The description on the AIA website correctly ascribed the dark streaks on the rim of M as being due to downhill movement of rim material. This image fascinated me so I looked at the Clementine high-Sun and multispectral perspective, which I enhanced to maximize visibility of the streaks. This showed that there were more in the very bright eastern wall of the crater, as well as conspicuous ones on the west wall. The Apollo image suggests that the upper rim of M is made of darker material than the rest of the crater, and the Clementine image shows that that is true pretty much around the rim. The Clementine image also reveals the existence of a very dark coating on the surface just outside the western rim of the crater - it is just detectable on the Apollo image. Looking at a broader areal coverage suggests that three faint dark ray-like deposits radiate from M to the west. Now look at the floor of M. On the slightly oblique view of the Apollo image it looks like a typical well-defined small floor (with a couple of tiny peaks). The plan view of Clementine reveals that the floor is not circular, but has an extension exactly aligned with the dark deposit just beyond the western rim of M. Was this an oblique impact that preferentially sprayed dark material toward the west? Interestingly, the LTO map shows that the area adjacent to the dark material is the lowest spot of M's rim, so I think the answer to the question is, Yes. Another point: the stratigraphy of a crater rim is inverted. That means that the last stuff to be excavated from a crater - the deepest material - winds up on top of the rim. Did M just barely tap into a buried dark deposit and spray it westward? More tomorrow!

Technical Details
Notice the lovely little crater sheared in half by M's rim. If this crater existed before M formed it is amazing that it wasn't heavily draped with ejecta. Perhaps if formed later, and then was cut in half as M continued to increase in diameter by landslides.


Yesterday's LPOD: And the Walls Came Tumbling Down