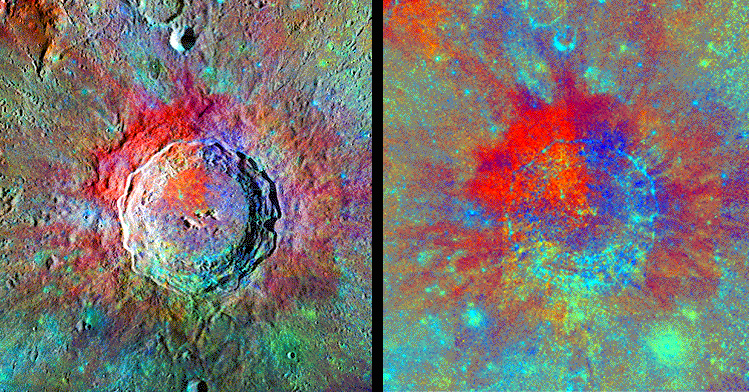 I AM ATTENDING A NASA MEETING ABOUT DEVELOPING A LUNAR EXPLORATION GAME. UNTIL I RETURN WE WILL HAVE SOME REPEATS OF GREAT PAST LPODS - THIS IS FROM FEB 13, 2004.

Robotic spacecraft have made two major contributions to lunar imaging. From the mid-1960s thru the early 1970s, high resolution images were obtained by Lunar Orbiter and Apollo spacecraft - this is still the highest resolution coverage available for the Moon. During the 1990s, global multi-spectral coverage was acquired by Galileo, Clementine and Lunar Prospector. Now, these two types of data are finally being combined. The slowdown stems from the fact that the early high resolution images were not digital. But during the last few years the US Geological Survey in Flagstaff, AZ has been digitizing Lunar Orbiter images. One dramatic example of the value of getting all the data digital is illustrated here. The image on the right is the somewhat standard Clementine color composite made with three wavelengths of Copernicus. In general, red colored areas are glass-rich impact melt, and blue is highland (anorthositic) materials. Co-registration of this Clementine spectral image with the USGS digitized Lunar Orbiter IV image results in a topographically and geologically much more interpretable image (left). For example, the red triangle of impact melt on the floor is bounded by the edge of Copernicus’ wall. Comparison with higher resolution Orbiter frames shows that the impact melt zone exactly matches the smooth surface area of the floor of Copernicus, where the melt drapes over underlying terrain. The fact that the impact melt doesn’t occur uniformly around Copernicus leads to speculation that Copernicus may have resulted from an oblique impact with the projectile coming from the south, southeast. And melt on the floor suggest that volcanism has not been important!

Tomorrow's LPOD: Is it Love or a Sinus Infection?