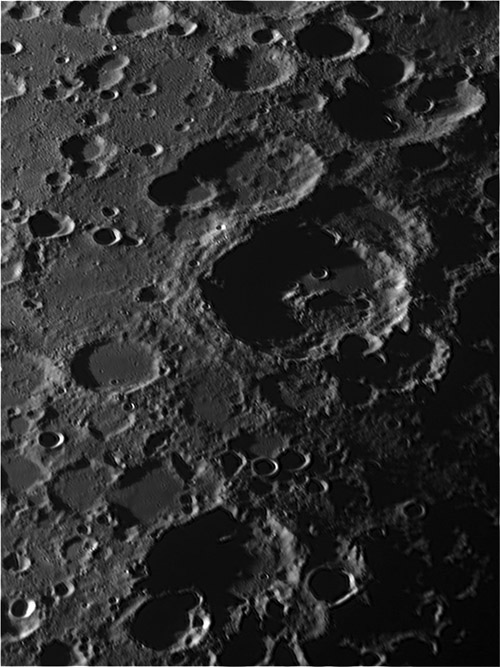 What is odd here jumps out immediately at me, but maybe doesn't to you. Notice that this is a highly cratered scene with lots of fairly large craters and some middle and small size ones. The areas between craters are pocked with little hills and craters. Pretty much every surface is occupied with some 3-dimension roughness. Except in one or two places. First, get oriented - the big crater just above center is Maurolycus, and the largest crater near the bottom is Gemma Frisius. Immediately above and left of GF is Gemma Frisius A. Notice how smooth its floor is compared to most of the terrain anywhere near it. If you look around you will see a few other relatively smooth surfaces, for example, Buch and part of the floor of Maurolycus. These smooth floors were previously used as evidence for volcanism that even though not dark like mare lavas, must be younger than most surrounding highlands surfaces that are rougher - they have been exposed longer to processes that make hills and pits. The standard response has aways been that such smooth materials are probably made of fluidized ejecta from the formation of the Orientale Basin that flowed downhill as a fluid and collected in low spots. But it has always been - and still is - hard to explain why only a few pre-existing low spots were made smooth when everywhere nearby was not. I don't know if any new evidence from LRO sensors can disprove a non-mare hypothesis, but I hope someday to know how to explain the odd distribution.