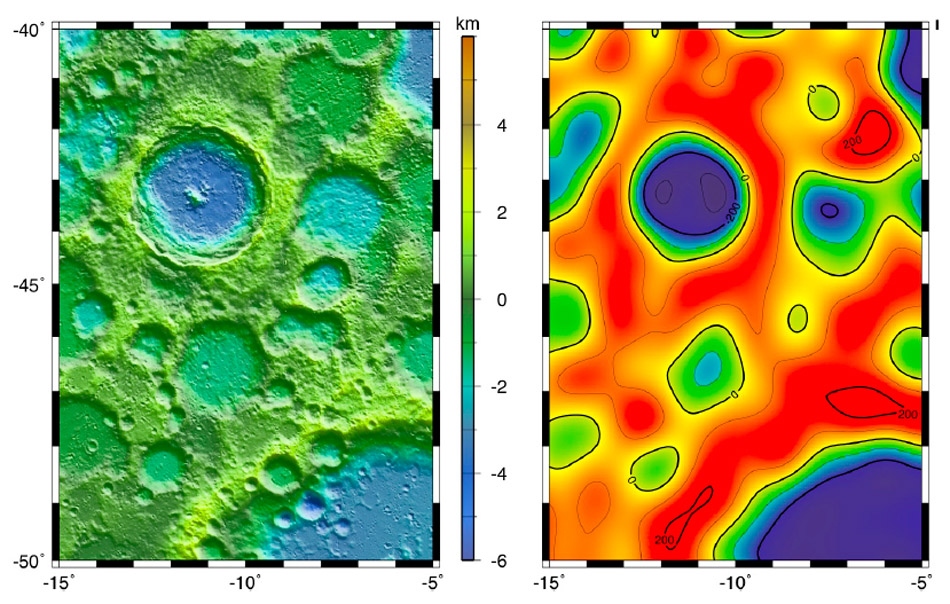 In 1979 I attended the first conference on the lunar highlands crust - all the stuff that isn't maria - and finally a second conference is being held this July in Bozeman, Montana. The program with abstracts has just been published and one of the exciting papers will include the first results from the GRAIL spacecraft, still orbiting the Moon. GRAIL (Gravity Recovery and Interior Laboratory) consists of two spaceaft, one flying about 200 km behind the other, that very accurately measure variations in the lunar gravitational field. GRAIL has been flying in a circular polar orbit about 50 km above the surface. In September it will resume measurements but at an elevation of 23 km, significantly improving its resolution. The 2 page abstract published by Maria Zuber and the GRAIL team includes this image but little interpretation of what it means. The submitted abstract is really a placeholder, and the image a teaser, for the new results I am sure will be presented in Bozeman. The left topographic map was created from LOLA - Lunar Orbiter Laser Altimeter - data and is critical for interpreting gravity data because corrections must be made for variations in distance from spacecraft to the surface. The right panel shows the GRAIL map for the region near Tycho, the purple circle at upper left. Reds are mass excesses - where the spaceraft were pulled closer to the lunar surface, and purples are mass deficits. The well known lunar mascons are much larger mass excesses than shown here that are due to upwelling of the dense lunar mantle under impact basins. Here the most prominent features are the mass deficiences within Tycho and the arc of Maginus at lower right. Presumably the corrections for topography have been made and the reduced gravity is not because of lower density solid rocks but results from the many crustal fractures due to the impact formation of the craters. From drilling of impact crater on Earth, and from mathematical models of such impact events, we know that the areas under crater floors are greatly brecciated - that is why lavas can rise to flood craters such as Plato and Archimedes. The smaller mass deficits under older craters may imply that the pulverized material under craters becomes compressed over time, increasing its apparent density and mass. I am sure the GRAIL team will offer much more sophistacted interpretations of gravity data, ushering in, as with all improved data sets, better understanding of some things and discoveries of previously unknown phenomena.