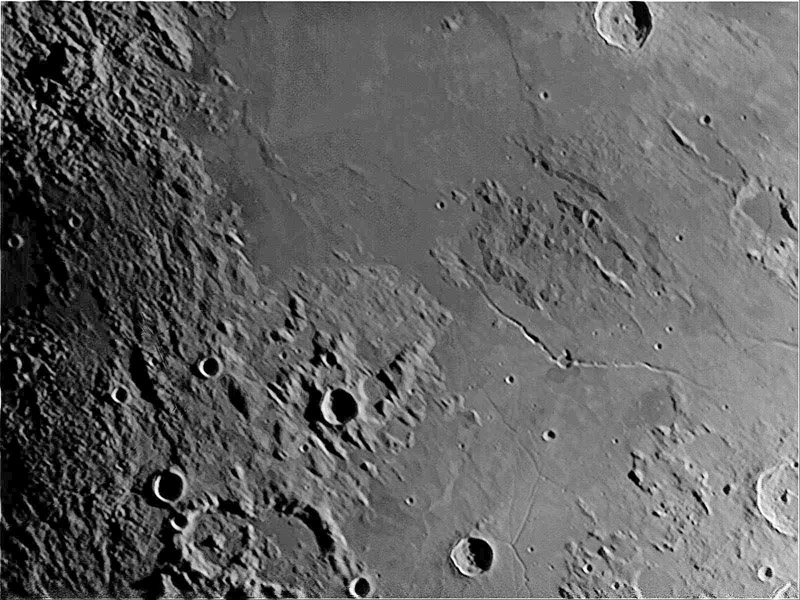 Steve reports that this is one of his first attempts at lunar imaging, and I congratulate him for a good start on a difficult pursuit. I was attracted to this image because of the different textures brought out by the painterly look. The western third is dominated by a rounded hilly terrain, with some surfaces projecting up into the incident sunlight and reflecting brightly, while adjacent land is furrowed and creviced, filled with narrow shadows. That contrasts strongly with the relatively flat, smooth and gray of Mare Vaporum and the Triesnecker-Hyginus surroundings. And a third texture type is also visible, the striated surfaces around Ukert, and less so near Godin and Boscovitch. All except the mare lavas in Vaporum are directly related to the Imbrium impact. The mega-rubbly stuff at left is basin-forming ejecta that must have been made up of rocky masses that travelled ballistically and landed as clumps. Further from the basin the ejecta seems pasty, smoothing over topo and also containing ejecta that gouged or fell as aligned secondaries. This pasty facies (a geologic word that simply means a terrain's general look) was probably continuous but the Vaporum impact basin interrupted it (or existed before Imbrium and wasn't filled in with ejecta) and was later flooded with lavas. The light smooth plains (called the Cayley Formation) around the rilles are lower than the surrounding hilly terrain and therefore probably subsided after the pasty ejecta was deposited, but before the more fluid Cayley was. This scenario can be considered a working hypothesis that needs to be checked by geologic relations between the different units.