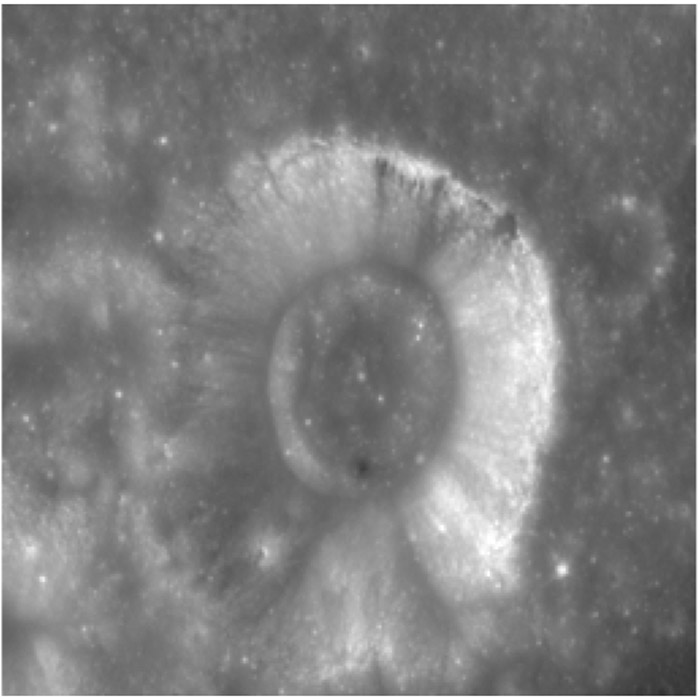 Concentric craters (CC) are such minor features that they have largely been ignored since I wrote about them 33 years ago. But now a young graduate student at the University of Hawaii has re-examined them. David Trang and his colleagues Jeff Gillis-Davis, Ray Hawke, and Ben Bussey reported at the recent Lunar & Planetary Science Conference that they have found 14 more CC than on my old list and have examined all of them with Clementine, Kaguya and LRO data to try to distinguish between proposed origins. Nearly everyone agrees that the main crater is a normal small impact crater, and the question is did the inner ring or torus form in association with that impact or is is an endogenous modification. (Endogenous is a 50 cent word that means created by internal, rather than external forces.) David's group found evidence against the hypotheses that the torus formed by a simultaneous double impact, impact into a layered target, volcanism, or viscous relaxation. They did notice that the distribution of CC along the edges of maria is quite similar to that of floor-fractured craters. Since FFC are believed to be impact craters modified by igneous intrusions, they propose, without details, that such intrusions also may have modified CC floors. This is consistent with the evidence that CC have spectral signatures virtually identical to material beyond the crater rim, implying that there were no volcanic extrusions. David provided this example of the 14 km wide CC Firmicus C as a suggestive example that volcanic material may be associated with the CC but mostly not visible. The small black spot on the torus appears to be pyroclastics excavated by a small impact crater. It will be interesting to see if David can find similar leakages at other CC, and if he can develop an explanation of how an intrusion would create CC morphology. I'm betting he can.