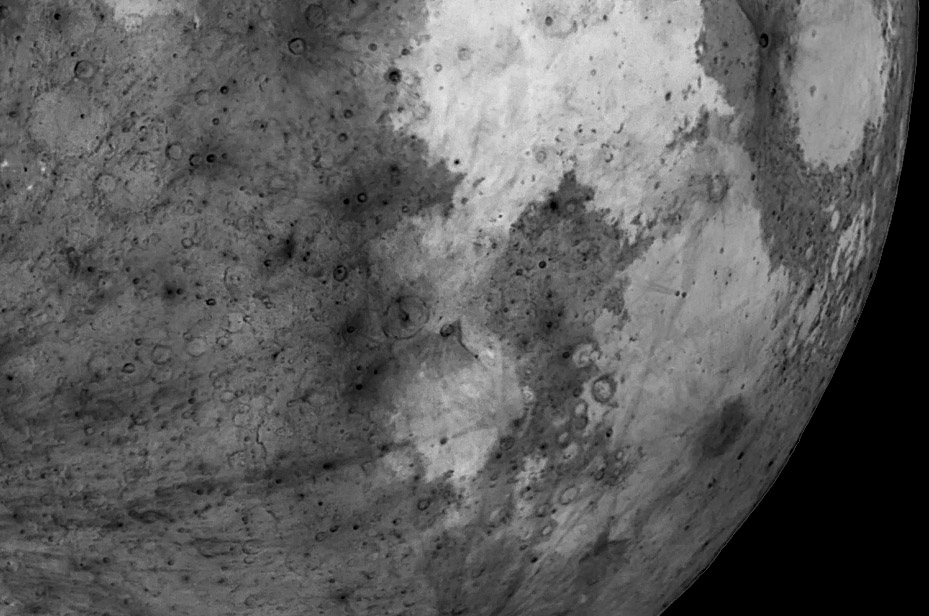 an unusual slice of rays cut from an image by Menno Jansen, Haarlem, The Netherlands

I have stumbled upon a largely overlooked paper from 1935 that was remarkably modern in its approach and conclusion about rays. Hacker and Stewart of Princeton University Observatory reviewed the theories about rays: alkali salt deposits, igneous dikes, and ejecta from volcanoes or impact craters. The latter idea was by an astronomer named Herbert Ives who recognized that craters created by bombs dropped from WWI era airplanes had rays very much like lunar craters. Hacker and Stewart thought that the ejection theory was most sound, but how could they decide it the rays had been expelled by volcanic eruptions or by impacts? Remember that in 1935 few impact craters were recognized on Earth so that origin for craters was often considered to be unlikely. The Princeton scientists calculated the velocity necessary for the famous Tycho ray to reach Mare Serenitatis. They conclude that a velocity of only 1 km/s would be required, a value that was believable for meteoritic impacts and consistent with blocks thrown from Krakatoa in its huge 1883 eruption. So ejection velocity couldn't help decide between volcanic or impact origins. They then looked at the distribution of ray craters across the lunar surface and found that they were essentially random. Volcanoes on Earth are definitely not random in location, but impact craters should be, so the good doctors came to the correct conclusion about the origin of lunar rays and their craters. And their results were largely ignored or forgotten by lunar observers who continued to come up with wacky volcanic theories.

Another idea from 1935
Also in 1935, Eppe Loreta at the Observatory of Bologna, Italy proposed that rays be named, like craters, after astronomers. Rays have apparently never received any designations, perhaps because of their discontinuous and nebulous nature. I am glad Loreta's idea never caught on - imagine every ray from Tycho being named for some second rate astronomer! Perhaps the present informal way of referring to rays - the Serenitatis ray from Tycho - is all that is needed. Or perhaps rays could be designated with the name of their parent crater followed by their azimulth. Thus the Serenitatis ray might be Tycho 35°.

Related Links
Still the best review of older ray theories is Baldwin's The Measure of the Moon, Chapter 19.