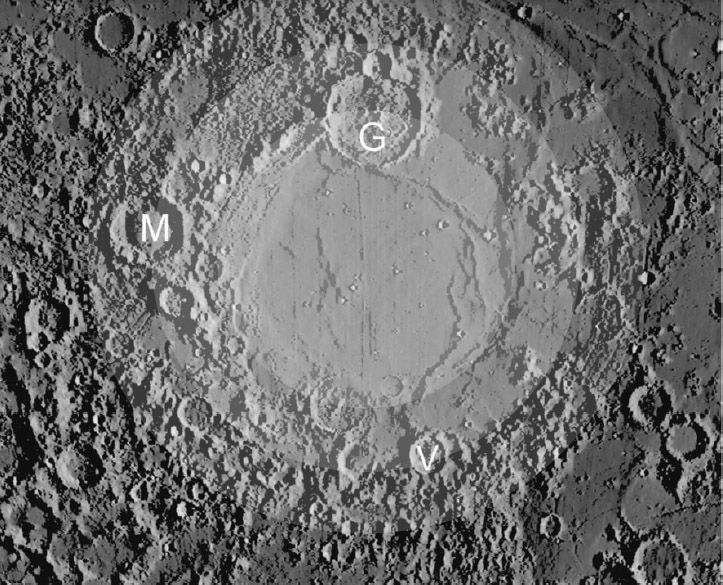 Basins have generally concentric rings, one being the equivalent of a crater rim and the others places where the interior and exterior of that rim-ring have been modified by faulting. It used to be assumed that the most prominent topographic ring was the crater rim equivalent but that doesn't seem to be true of Orientale so it is necessary to look for ejecta - which should all be outside the rim. But for older basins, ejecta are hard to find. So I won't state which is likely to be the main rim of Humorum but three circles were drawn to pass through the three rim arcs identified in yesterday's LPOD with the letters A, B and C. Each of the circles I drew is a perfect circle without the little deviations that occur in geology. The circles are eyeball best fits through high spots that arguably are real ring remnants. Ring A passes through the Percy Mountains and on the opposite side of the basin pass along a massive mare ridge where the crust drops down about 250 m from the outside to the inside of the basin. That is a satisfying tectonic boundary. The B ring that passes through a cluster of hills on the northwest side of the basin goes right along the ssss Scarp on the basin's southeast margin. Again, a significant boundary. Finally, ring C has a strong, short ridge to define its location at the northwest, but only scattered hills which may or may not be significant. The circle, drawn to be concentric with rings A and B, passes along the eastern edge of the Hippalus Rilles, and appears to follow a mare ridge to the north. The diameters of these three rings are about, 330, 510, and 675 km. After making these measurements I looked up Humorum in Paul Spudis' authoritative Geology of Multi-Ring Impact Basins. What a surprise! The following ring diameters are listed: 210, 340, 425, 570, 800 and 1195 km. First, there are twice as many rings identified as readily appear on this LRO altimetry visualization. Second, only my 330 km ring is a close match for any of the six. So what does this mean? I only looked at this one altimetry visualization to define possible rings - looking at all available images is always best. But the evidence for some of the six rings is not strong; I guess I am more conservative than I thought. As for the diameter differences - for each ring I made one measurement from west to east using the QuickMap Path tool; it would be prudent to make more and average them! Nonetheless, the differences in my rings and the officially recognized ones are extreme. No one previously had such an excellent image to study and I haven't found a reassessment of Humorum's ring structure since the LRO data became available. Perhaps, a more careful investigation in indicated.


Yesterday's LPOD: One Shot of Rings