There is No There There

the wrong decision for space and America 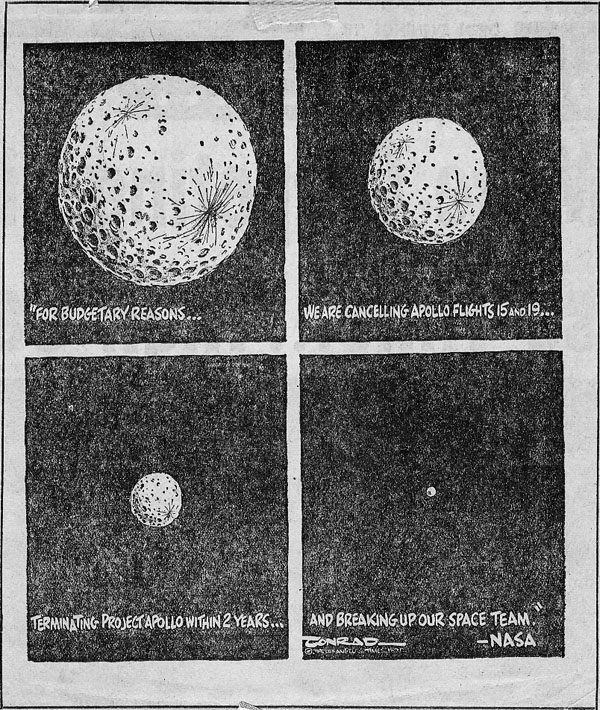 Eighty years ago Gertrude Stein famously quipped about Oakland, California that, "There is no there there", implying that there was no reason to go there. The White House has decided to go to Oakland in space.

Recognizing that President Bush's call to return to the Moon and go on to Mars was hollow because insufficient funding was made available to achieve those goals, President Obama's Augustine Committee said either increase NASA's budget by up to $3 billion annually or forget about the Moon. The Committee said that with NASA's current budget, which until now has been nearly constant for more than a decade, America's only choice to have some human presence in space beyond low Earth orbit is to rocket to an Earth-approaching asteroid, Mars' Phobos, or to a dynamically unique Lagrangian Point where the gravitational attraction of the Earth, Moon and Sun balance.

The Lagrangian Points, Phobos and an asteroid are Oakland. There is nothing at a Lagrangian point, but a satellite placed there would not need much fuel to stay there. Satellites make sense, but why would we send humans there - there is nothing to do, no resources to exploit, no reason to visit or to stay there. Phobos is only a minor mystery in the solar system, and going there would be a very frustrating Mars Interruptus. An Earth-approaching asteroid is of high scientific interest but most are so small that a spacecraft would be more likely to dock than to land, and because these asteroids whip pass Earth and then return toward the asteroid belt, human visits would be brief. Some asteroids are rich in platinum, cobalt and other rare materials and may be economically advantageous to mine, but someday machines will do it, not astronauts in hardhats. Going to asteroids, Phobos or Lagrangian Points creates no space infrastructure; twenty years from now we will have built nothing anywhere. We will have built rockets capable of taking us only to where we don't really want to go.

If we decide not to explore we will be left behind. During the last decade, China, Japan, India, and the European Space Agency all sent their first spacecraft into orbit around the Moon. These nations did it for three reasons: for prestige, to spur their own technological development, and in the belief that the Moon will become economically important for their nations' futures. Last year, the US also sent a rocket to the Moon that carried two probes. One was the Lunar Crater Observation and Sensing Satellite (LCROSS) that proved what had been theorized for 50 years - water is preserved in the permanently dark floors of polar craters. The water will be technologically challenging to mine because of the extraordinarily cold temperatures, but it will be an invaluable resource for working on the Moon, and after separating into hydrogen and oxygen, to use as rocket fuel - a critical resource for traveling beyond the Moon. The second American probe is the Lunar Reconnaissance Orbiter, which carries powerful cameras and other sensors. Yes, LRO photographed the flags Apollo left on the Moon - those missions weren't faked - but more importantly it is detecting and mapping lunar resources and details of terrains, providing knowledge needed for returning to the Moon.

But now, for a lack of three billion dollars, the administration wants to capitulate in the opening of the solar system for human use. China, India and Japan have already announced their next, more sophisticated missions to land robotic spacecraft on the Moon as early as 2011, and humans in the next decade. China clearly states that its lunar goal is ultimately to mine Helium 3, which may power future, pollution-free, power plants on Earth, a dream that no one yet has the technology for, but an abundant source of Helium 3 will incentivize.

During the last year the Obama administration has invested hundreds of billions of dollars to preserve the banking system and automobile manufacturers. Considering the magnitude of those expenses to prop up failing industries of the past it is impossible to believe that $3 billion cannot be invested to preserve our options for the future. The Constellation program may not be the right solution for returning to deep space, but the Moon was and is the proper target. We should have fixed the implementation, not ditched the goal.

Obama wants NASA to concentrate on environmental satellites, research and technology development, and education. Those are all worthy goals, but they will fail us as a nation. In particular, NASA's irreplaceable contribution to education is in providing the inspiration of striving to send humans to the Moon and beyond. The destination matters, kids won't be inspired when a NASA ship first arrives at a Lagrangian Point and finds nothing there.

Now is when the US must make a decision to participate in the future, or be prepared to watch China establish resource plants on the Moon, selecting optimum sites from the LRO date we elect not to use. Perhaps all of America will become Oakland.

Chuck Wood
Sorry for this - we return to normally scheduled discussion of images tomorrow.