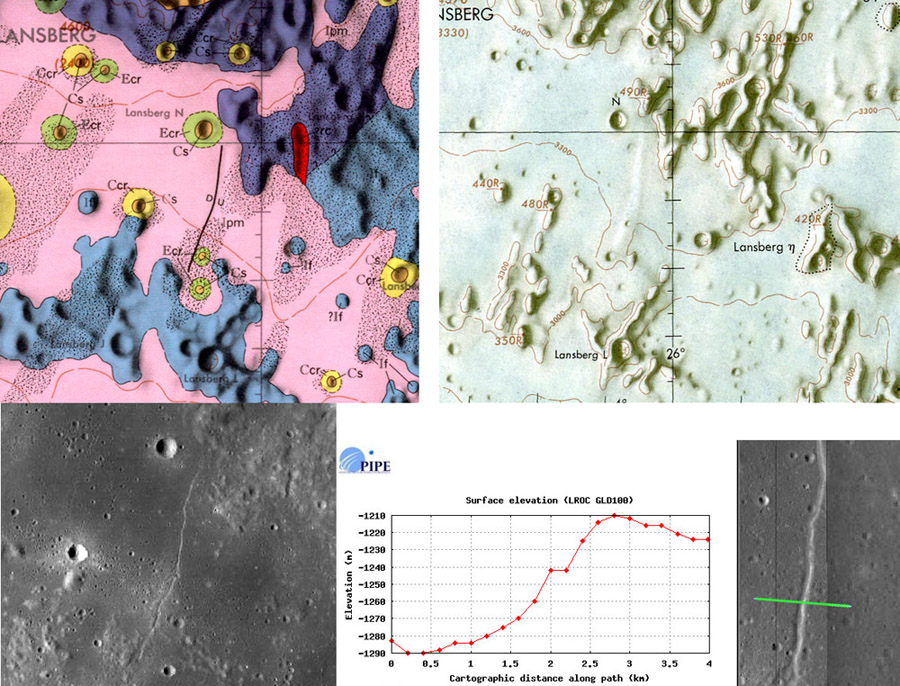 Yesterday's LPOD (Small Feature Tour) included a linear shadow-casting feature south of Lansberg. I called it a mini-Straight Wall because of its shadowing. Mike Wirths, whose great images were used to create many LPODs, let me know today that a discussion of this feature has been going on in a Telescope Reviews forum since mid-February when one of its members, Brian Albin, pointed out the feature on a Lunar Orbiter frame. Discussion followed about the features name (there is none) and nature - a fault or a rille? The feature has been recognized at least since 1964 when it appeared as a bright feature, presumably a mare ridge, on Lunar Aeronautical Chart (LAC) 76 (above right). In 1965 the US Geological Survey Geological Map of the Riphaeus Mountains (above left) depicted the feature as a fault with the east side marked as higher (up) compared to the west. The LRO WAC image (bottom left) shows the feature as a rille in the south and looking sort of like a fault further north. A close up NAC view (bottom right) reveals that even the northern part is a rille, about 200 m wide. The topography cross-section surprisingly shows, however, that the rille marks the mid-section of a 3 km wide, 80 m high rise from west to east. In the Telescope Reviews discussion the geologically perceptive Mardi Clark interpreted the feature as a graben, i.e., a tectonic rille. I have commented twice, yesterday calling it a fault (based on a QuickMap topo profile across a WAC image), and last month I reported that from LRO images that it was a narrow rille. From a plan view it is a rille/graben, the images commonly show the east side is higher as if it were a fault, and the topo cross-section (which I am not certain I completely believe) makes it a thin rille perched in the middle of a continuous rise. It is an unusual linear feature, definitely a rille, but also a shadow-casting elevation.