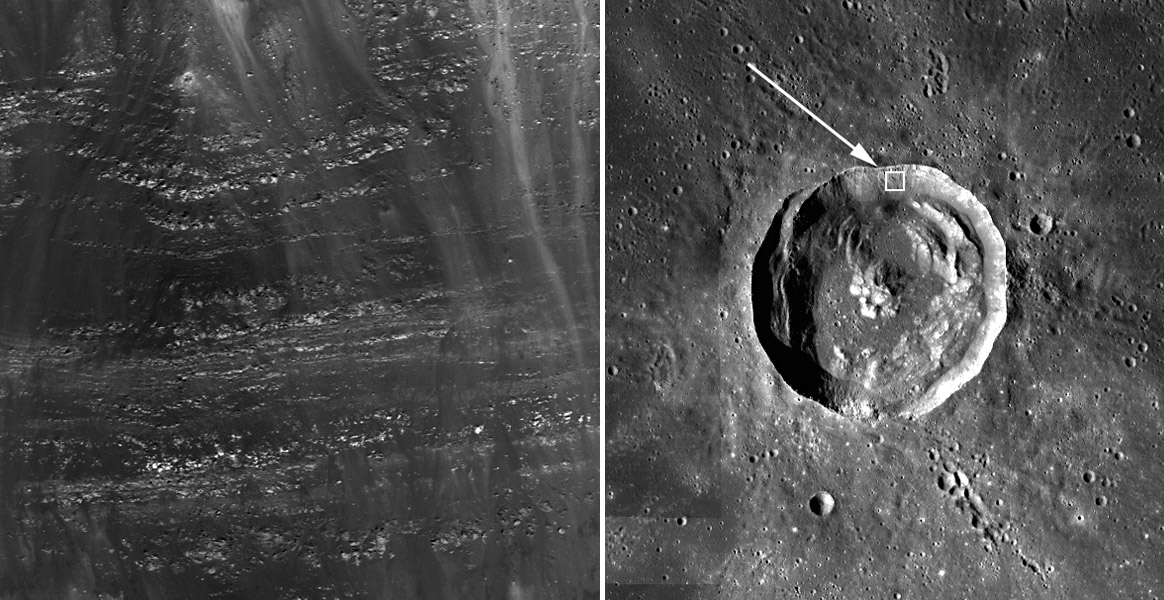 Have you ever stood on the rim of Meteor Crater? If you have been that lucky you will remember seeing rim rock layers tilted upward 30° to 40° and in some places nearly vertical, yet the same rock units are horizontal a mile beyond the crater rim. Those rock layers were originally buried beneath the surface but the impact bent then upward, raising them above the surface. So crater rims reveal otherwise invisible layers penetrated by the crater. This new LRO view of the upper wall of Euler crater reveals buried layers in the surrounding Mare Imbrium. There are dozens of separate bright layers, each a single rocky lava flow, and the darker adjacent material may be regolith formed by small scale impact cratering before the next eruption.This image demonstrates that maria are not formed by a small number of huge eruptions but by a vast number of thin - 3-5 m thick - flows that cool down completely before the next eruption occurs. It is estimated that maria are typically 3 to 5 km thick, about 1000 times more than individual flows seen here, meaning that it may take about a 1000 flows to fill an impact basin. And when we look at ages of the different parts of one mare the exposed lavas may range over 1 billion years. So, grossly guestimating, 1000 eruptions in 1,000,000,000 years gives an average interval between eruptions of a million years. Wow! So even if the Moon were still volcanically active - and it isn't - the last eruption might have happened when our ancestors roamed the plains of Africa in small hunter/gather bands.