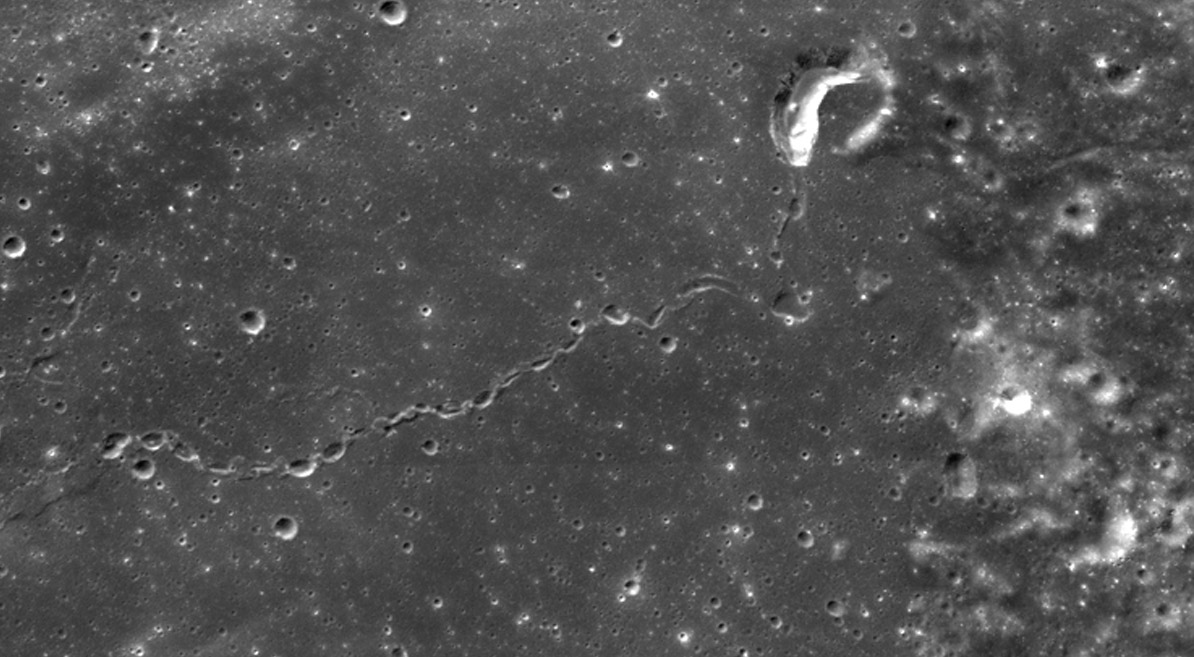 This is most bizarre rille on the Moon. Apparently first noticed on Lunar Orbiter V images and later photographed by Apollo 15 astronauts, this weird feature west of Gruithuisen seems to have been forgotten. This recently released Kaguya Terrain Camera mosaic brings it back to our attention. It starts (upper right) in a banana-shaped depression similar to the beginning of Hadley Rille. From this vent lava flowed downward (in this image) constructing a lava tube whose roof partially collapsed. At the rounded diamond-shaped collapse the lava flowing through the tube turned 90° and began a 40 km long slightly sinuous flow to the south (left). The oddity is the roughly alternating oval collapses and low ridges, giving the rille a braided look. At its south end the twisted rille seems continuous with a mare ridge. This suggested to Pete Schultz (Moon Morphology, p 408) that the elevated bits along the rille were the remnants of a mare ridge and that the oval depressions collapsed into a lava tube under the ridge. Back in the early 1970's when Pete wrote, most lunar scientists (me too) thought that mare ridges were volcanic structures. But after Apollo it became clear that most were low angle faults, perhaps with no associated volcanism. And we have learned that banana-shaped depressions are source vents for lava tubes. Sometimes in Hawaii lava erupts out of collapse pits and that may have been what happened here. The rille's relation to the mare ridge is still unclarified - is it a chance impingement or is something happening that we still don't understand?