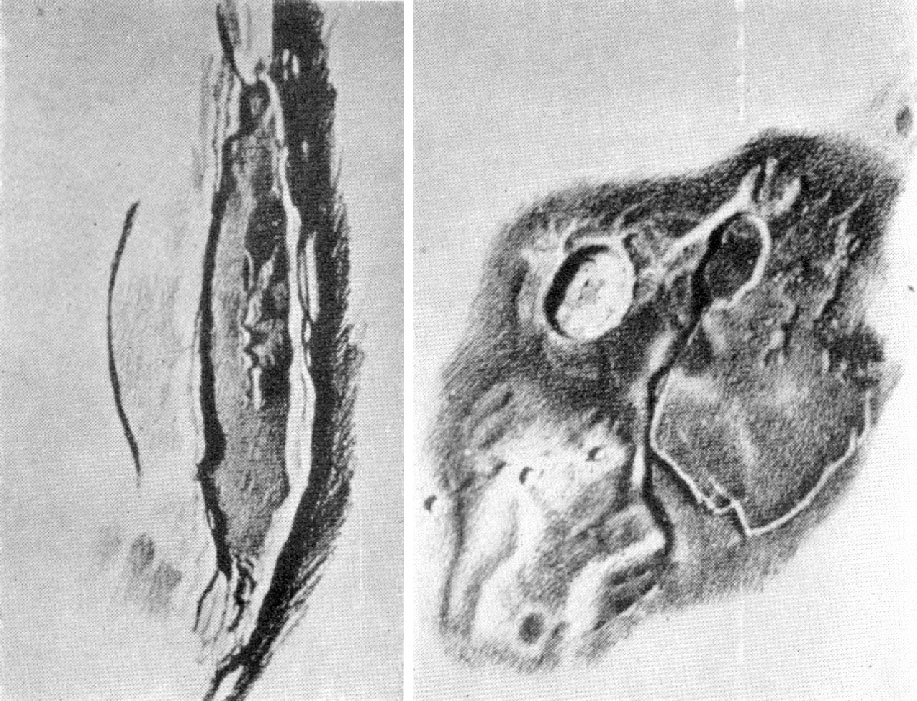 Rosse is a name known to serious students of the Moon as a small crater on the floor of Mare Nectaris and crossed by a Tycho ray. Less known, certainly to me, is that one of the Lord Rosse’s was an accomplished observer of the Moon. That was another revelation - there were multiple Earls of Rosse, in fact there is one still living at Birr Castle. The Third Earl built a 36″ reflector and then the famous 72″ telescope - the largest in the world for 3/4 of a century. Here is what John McConnell says about the origin of these drawings:

The Fourth Earl was a prolific observer not only of the moon but of Jupiter, Saturn and so on…..and made some very skillful drawings. It is also interesting that using the 72-inch reflector on 17 September 1877 he confirmed the existence of two dwarf satellites of Mars, Phobos and Deimos, discovered the month before by Asaph Hall. The Forth Earl made the drawing of Humboldt on 31st August 1860 using the Birr 36-inch reflector. The second drawing, also made by The Fourth Earl, is of Aristarchus and surrounding area. No specific date other than 1863, but also made with the Birr 3-foot reflector. The detail is very good and even shows the bright radial bands. Not many of the original lunar drawings appear to have been published as against drawings of galaxies and nebula, but those are mostly by The Third Earl or his assistants. Anyone visiting Birr Castle’s Scientific Heritage Centre can see many of the original drawings by both the Third and Fourth Earls. Of course the Fourth Earl also measured the temperature of the moon using a special instrument attached to the 36″ reflector, which by that time was equatorially mounted, (the mount having been built by the Fourth Earl). That instrument has been restored and is also on display.

Technical Details:
The source of the Rosse drawing is a little book called “The Astronomy of Birr Castle” by Sir Patrick Moore and published in 1971 by Mitchell Beazley London. A real gem of a book!

Tomorrow's LPOD: It's Just a Phase