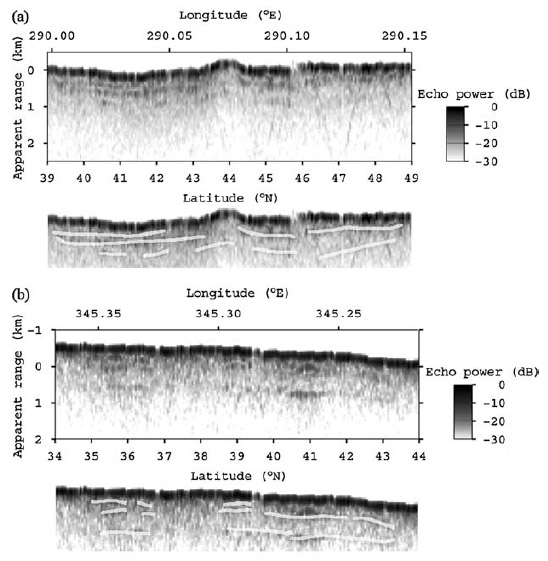 image by Oshigami and others (2009), Geophysics Research Letters

Apollo 17 included a radar sounder that pumped pulses of energy into the lunar surface and detected reflections within the upper part of two maria. Kaguya carried an improved Lunar Radar Sounder (LSR) that covered much more of the lunar surface. The Kaguya images here show cross-sectional views of layering within Mare Imbrium (a) and Oceanus Procellarum (b), with the second and fourth images including white lines that mark strong reflections. The LSR science team interprets these reflections as regolith layers that formed on temporary top layers of earlier lava flows, which were later covered by more recent lava flows. This layering confirms that each mare was not emplaced all at once - which no one advocates - but that each is a thick pile of many separate lava flows. The distances between the regolith layers - apparently 100 to 500 m - is much greater than the few flows visible on the the surfaces of mare (average about 35 m) so that the spaces between regolith layers include multiple flow units that erupted on top of each other quickly enough that no appreciable regolith built up. Surprisingly, the LSR detected buried regolith layers in only about 10% of the western maria. This suggests that the lavas erupted onto the surface in nearly continuous outpourings, without long enough gaps for significant regoliths to form. But we know this can not be true because there are as much as 2 billion years difference in ages of the youngest and oldest lavas in these areas. Two explanations are offered by the LSR team. Younger lavas may have scoured away the built-up regolith, making in undetectable. Additionally, regolith layers have only been detected under areas were surface lavas are at least 3.2 b.y. old. Because the rate of accumulation of regolith depends on the impact cratering rate, deep regolith layers were more like to have formed on older lavas than younger ones, because the cratering rate declined greatly after about 3.8 b.y. ago. This explanation can't be completely true because all of the young lavas cover older ones. This Kaguya result is wonderful because it provides new data that answers some questions but leaves more for future astronauts and scientists to investigaate.