Welcome To the Hotel Crisium 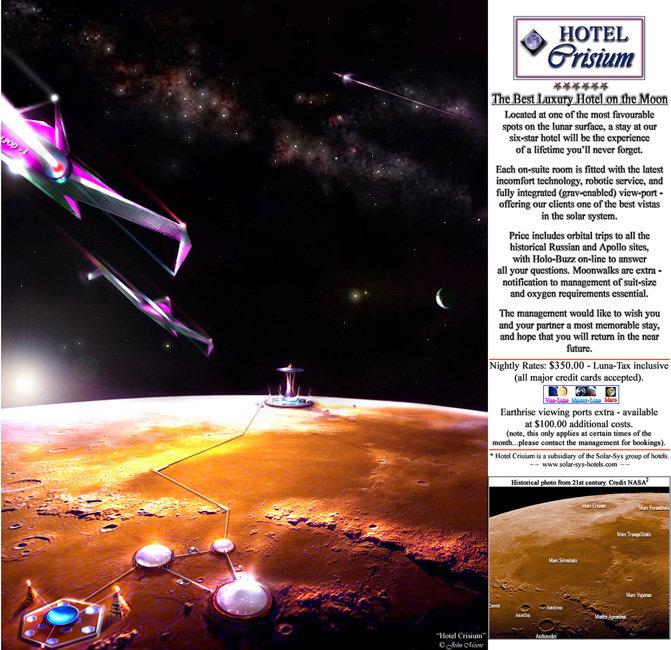 While time travelling recently to the 22nd century John found this old advertisement from Planetary Geographic digazine announcing one of the first mega-hotels on the Moon. Starting in the 2050s as nano-construction allowed quick and cheap transformation of lunar regolith (and later martian regolith) into self-built structures (with harvest of water), visits and colonization of the Moon rapidly advanced. At first only oil tycoons, basketball stars and those bankers who weren't in jail could afford visits to the Moon. But then costs fell and holidaying on the Moon became as common as going to Las Vegas. As with many mega-hotels and casinos the Hotel Crisium surrounded a historical site - the Luna 24 lander - and although it didn't have the same quality theme park as the Hadley Hilton and its exhilarating ride down the side of the Hadley Rille, it was an adventure to levitate over the surface - leaving no footprints - to touch the 200 year old, amazingly antiquated spacecraft. Sadly, during the collapse of the Moon Bubble of 2312 the Hotel Crisium and many other structures were sold as scrap and only the Luna 24 was saved from nano-recycling.

Related Links
Coming soon to a Moon near you