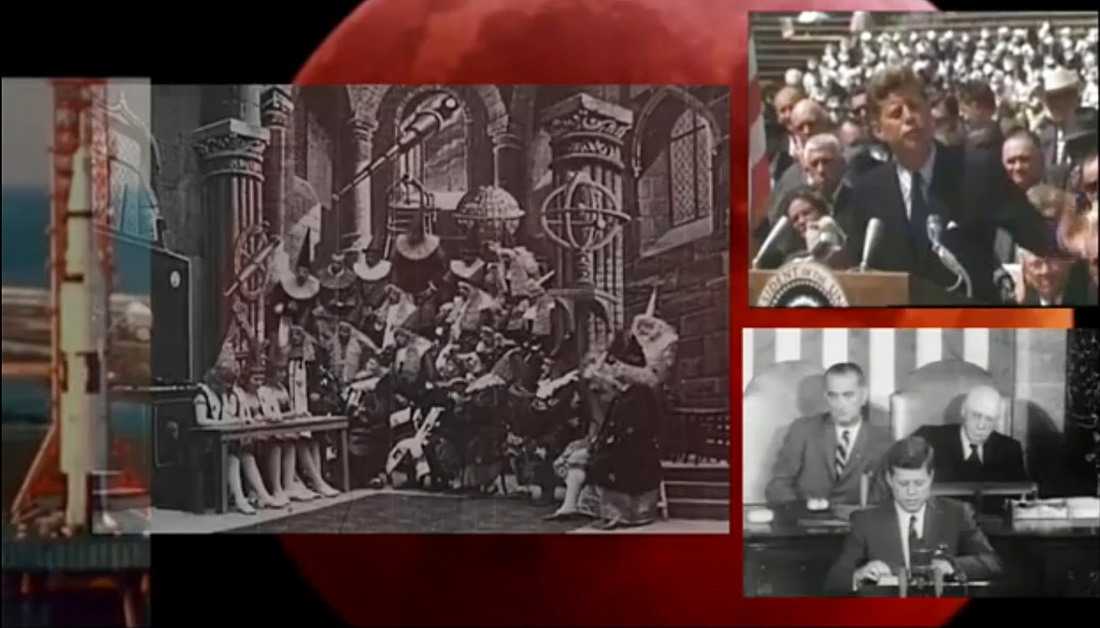 Screenshot from this film (or click on image) was commissioned to accompany the exhibition "From the Moon: Mapping & Exploration" Directed by Mark Sloan Film montage by John David Reynolds Original musical score by Bill Carson http://moon.cofc.edu/videos.html

Earlier this year I read for the first time the two great books by Jules Verne: From the Earth to the Moon, and Round the Moon. I don't read much fiction, but I do read a lot about Apollo missions, and I was totally blown away by the vision that Jules Verne had for how it actually took place a century later. As we know, even down to the places and names (Florida, Columbia(d), splashdown in the Pacific Ocean). As I read Vern'es books I could see Apollo in most of what he wrote. This morning I came across this short 14 minute film that compares the film version of A trip to the Moon (1902, loosely based on the book - the book is more accurate) showing the silent film along with footage from John F. Kennedy's speech, to the parades after the astronauts returned. All this was foretold in Verne's book. Apollo was a unique event, very hard to repeat as it is turning out, and we are lucky it happened at all. It was a battle in the Cold War and America won. I just finished reading John Logsdon's John F. Kennedy and the Race to the Moon, it was a fascinating insight into the thinking of JFK and the beginnings of the Race to the Moon. Project Apollo could so easily have gone the way of the Constellation program, and we would be still looking up at a Moon where no humans had touched and the closest story to how it would be like to go there would still be Jules Verne's Round the Moon. I shiver at the thought!

From the Earth to the Moon and Round the Moon e-book:
http://www.archive.org/details/fromearthtomoonr00vern

From the Moon: Mapping and Exploration
http://moon.cofc.edu/

Moonwalk One (1970) a great film commissioned by NASA surrounding the event of Apollo 11, featuring some of the footage in the above video.

The Decision to go to the Moon:
http://history.nasa.gov/moondec.html

John Logsdon: JFK and the Race to the Moon on YouTube:
http://www.youtube.com/watch?v=Lgwnj7QXyQA

Tomorrow's LPOD: Map of the Moon