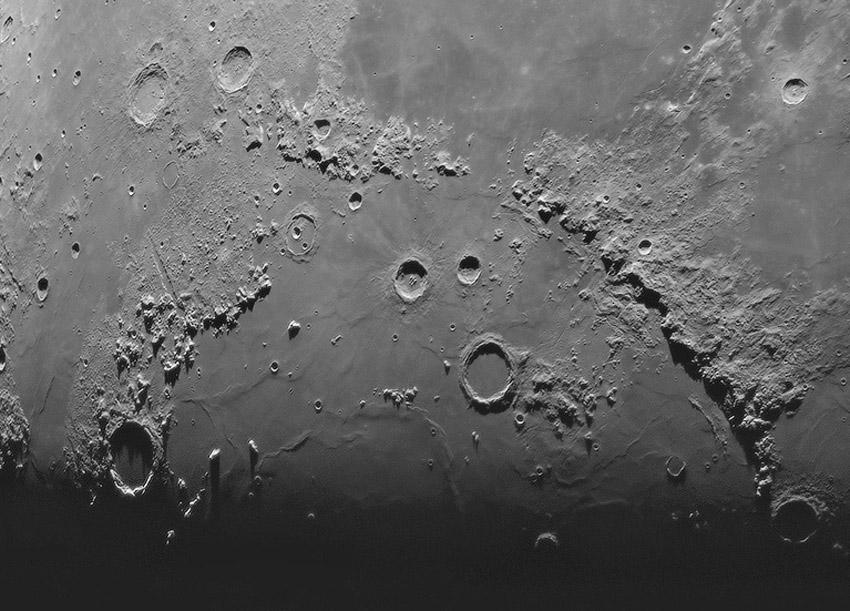 north to the left image by András Papp and Jozsef Szehofner, Hungary

If this isn't the most magnificent region of the Moon, what is? The arc of the Apennines, with concentric ridges and peaks on the mare floor, define the Imbrium impact basin. Various craters in different states of preservation and illumination provide exclamation points across the landscape. It is remarkable how different the basin ejecta is from the right to the left sides. The Apennines have towering scarps facing the maria and pasty ejecta with radial texture thinning away from the basin center. The ejecta between Plato and Cassini is completely different. It is less coherent and less spectacular - probably why it doesn't have a name. Some tall mountains face the basin with only scattered hillocks behind them. I had never noticed before the roughly circular patch of taller mountains between Plato and the Alpine Valley. I wonder why they are there? Similarly, I don't remember seeing the shadow-filled short depression near Pico Beta. Oops, in checking past LPODs I discovered that it has been imaged before under almost identical lighting. But I still don't know what it is, do you?

Related Links
Rükl plate 11 and others!