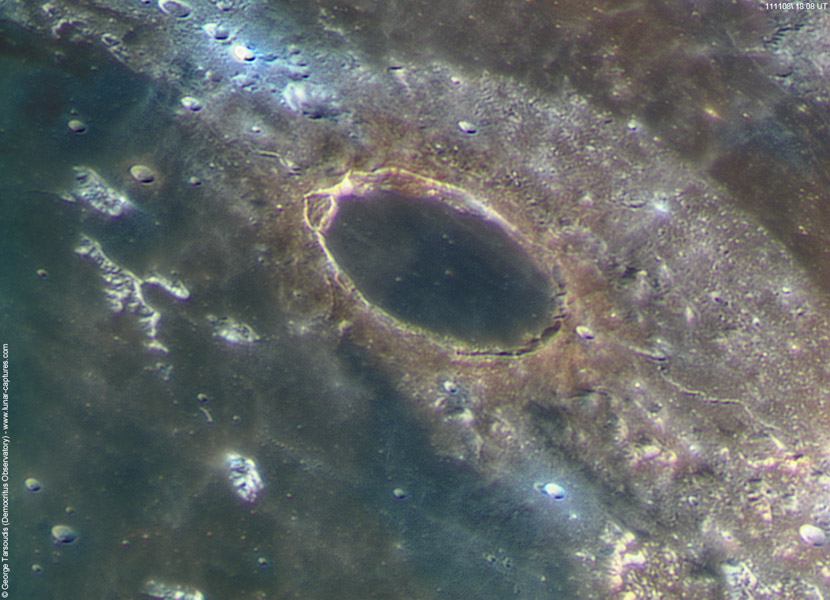 Most images in the last 2500 LPODs (today is almost that anniversary - not correcting for missed ones) have been monochrome, with some dramatic exceptions. Most of those colorful exceptions have shown the entire Moon or large regions, so George is introducing color imaging of specific features. For many craters, especially in the highlands, color provides very little additional information but this image demonstrates that isn't true for all features. The most conspicuous color anomaly here is the orange halo that surrounds 100 km wide Plato. The halo is known but the color makes it more apparent and must be giving some clue as to the compositional of the material. The halo is made up of the continuous deposit of Plato's ejecta, most of the distal material has been buried by Imbrium and Frigoris lavas. The halo is also visible, but apparently bigger, in radar imaging. Two other features that stand out are the small bright impact craters, Plato J east of Plato, and the super bright Plato M to Plato's west. Their brightness is due to the fact that pulverised material of any composition is bright. The brightness and whiteness of the mountain Pico, near bottom left, and the nearby Teneriffe Mountains are due to their composition. They are highland material from below the Imbrium basin. Finally, the variations in lava flow compositions are evidenced by the gray-blue, black and brown colorations or different parts of the maria. There are a lot of colorful stories here.