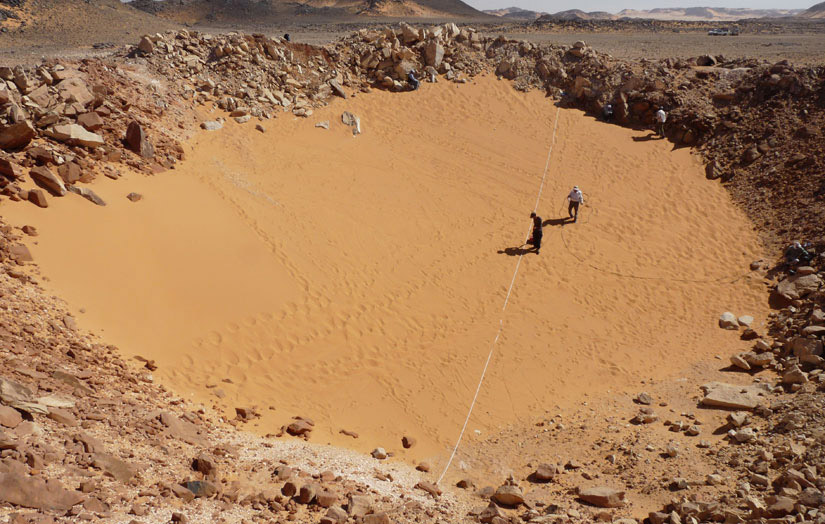 A small impact crater, 45 m in diameter (about the size of a baseball diamond infield), has recently been discovered in Egypt. Its origin is certain because it is surrounded by thousands of iron meteorites. The crater is quite young, although I've seen no estimates of its age, and seems to be modified only by inblown desert sand. Remarkably, bright rays can be seen on the Google Maps image, extending up to 3 crater diameters from the rim. The rays do not seem to be distributed in all directions, with 2-4 to the south-southwest, and the same number to the north-northeast. The southern rays are faint, wispy stripes, while the northeastern ones are much brighter, but of different character. They are isolated and look (when enhanced) more like individual clouds on the ground. There is a hint that they start at a point and radiate away, much like the individual splattered rays from Tycho on the floor of Pitatus; I wonder if there are small secondary craters? The rim of the crater appears much wider and more massive on the southern and western sides, which could suggest an oblique impact. The first publication has appeared; it will be fascinating to follow more detailed reports to learn about these rays and possibilities of secondary craters, impact angle and formation age.

Technical Details
Google maps are not permitted to be modified and distributed so to be safe one is not show here. But you can do what I did. Do a screen capture of the image and use Photoshop or some similar program to greatly enhance color contrast - I used unsharp mask.


Yesterday's LPOD: Curves Near the Shore