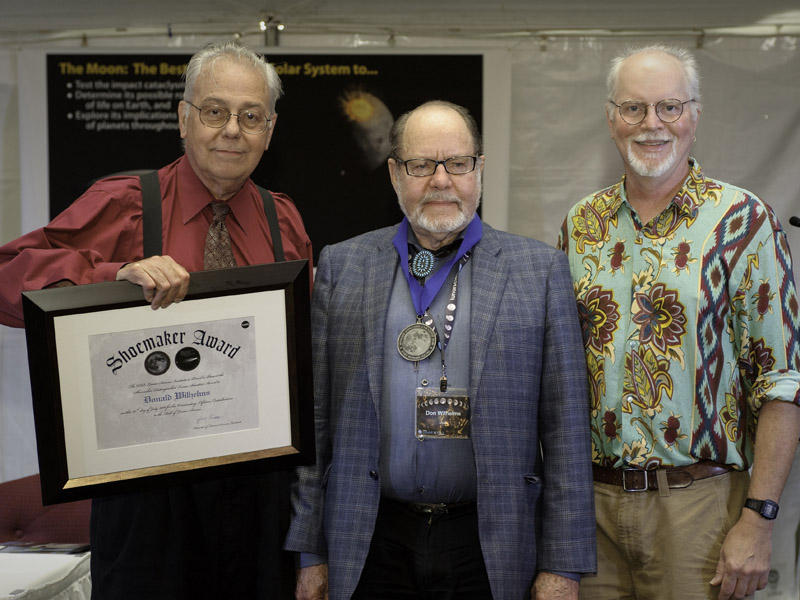 image from NASA/LSI/Dominic Hart. Don Wilhelms is flanked by Dave Morrison, previous LSI Director (red shirt) and Jeff Moore (Hawaiian shirt). On the original image the signature can be read of the the new LSI Director, Yvonne Pendleton, who is younger, beardless and female - the torch has been passed.

Writing an LPOD about a friend is an uncommon pleasure. On July 20th Don WIlhelms received the new Shoemaker Distinguished Lunar Scientist Award during a meeting at the Lunar Science Institute at NASA Ames Space Center. Lunar science is not a traditional discipline, lacking a professional society and hence mechanisms to recognize pioneers in the field. The LSI wisely initiated an award for a "scientist who has significantly contributed to the field of lunar science." Shoemaker was the preeminent lunar geologist at the end of the 1950s, and in the early 60s, and his colleague Don Wilhelms took one of Gene's innovations - geologic mapping - and oversaw its application across the entire Moon. Don wrote the foundational book, The Geologic History of the Moon, which integrated the geologic mapping approach with Apollo results; when one hears the word Wilhelms, this book is what is meant. Wilhelms was the most important lunar book since Baldwin's 1949 The Face of the Moon. Don's To a Rocky Moon is the best scientific tale of America's lunar program, told with his insight as an important player during the entire period. It will be hard next year to find another award recipient in the same class.

Tomorrow's LPOD: Curves Near the Shore