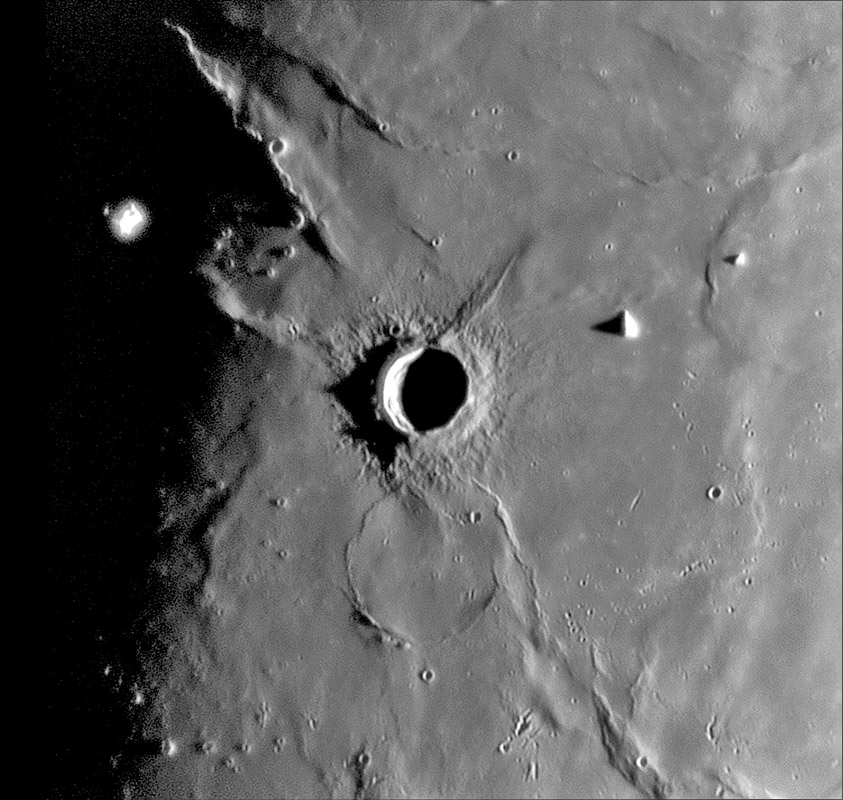 I've done it again. I've taken one of Stefan's carefully processed images and enhanced it so much that it reduced the tonal smoothness that he works hard to produce. My excuse is that harsh processing often reveals suble topographic features that are otherwise easy to miss. Here those features are mostly ridges near the crater Lambert. But there are other things here too - the bright rays and crater chains from Copernicus on the right side, and a short rille that is well known from Apollo 15 and 17 Metric images. But the ridges catch my eye. For a terrestrial volcanologist, it looks like the volcano Lambert occurs at the intersection of three radial ridges, no doubt volcanic dikes that transported magma away from the underlying magma chamber. But that would be wrong, for Lambert is an impact crater. North of Lambert there is an arc of mare ridges that probably mark part of one of the Imbrium Basin's inner rings. Notice how in the middle of the arc the ridges become much shorter and lower elevation. We think we know some general ideas of how mare ridges form but the details are much less clear. Finally, are those lava flow fronts west of Lambert? There should be fronts everywhere in the mare, but their low heights - a few tens of meters at most - mean that small scale impact cratering chipped away their edges, making them very difficult to detect.

Tomorrow's LPOD: The Eye vs the DTM