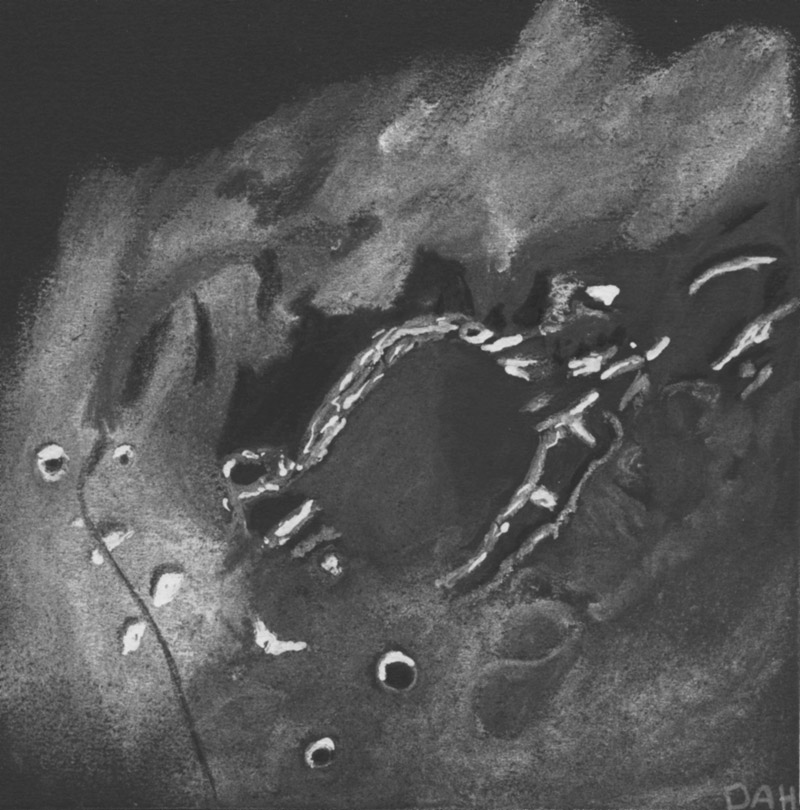 On Monday evening just after dark I got a break in the cloud and the Moon shone through with Jupiter in a close embrace. From my observatory I was soon touring the terminator as I so love to do. I was looking for that mountain, ridge, rill, crater or flooded plain that just caught my eye above all else. Tonight it was lava flooded 80km diameter crater Julius Caesar that did just that, with its low, irregular, and heavily worn wall, washed out completely and the southern end I liken it to a burst dam. It is located to the west of Mare Tranquillitatis, and directly southeast of the crater Manilius on the Mare Vaporum. To the east is the rounded 18 km diameter impact crater Sosigenes. The floor of Julius Caesar is relatively level, especially in the southwest half. The northern half of the interior has a lower darker appearance than the south, I hopefully have captured this effect in my sketch. Most likely the floor has been covered or modified by ejecta from the impact that created the Imbrium basin. There are a number of crater remnants overlapping the rim along the south and northeast edges, the illumination at the time of drawing has allowed me to see and capture one or two of these. A low ridge crosses the floor across the northeast sections of the crater. Further to the south of Caesar we see the striking graben or fault trough Rima Ariadaeus shown as a dark line in my sketch it runs for over 300 km.

Note by CAW: The grand larceny is that Dale copied me on this sketch that he sent to Astronomy Sketch of the Day, and I stole it! I did it because it reminds us that visual observing and sketching were the only way to make lunar observations for 300 to 350 years, a venerable past. And it also gives me a chance to recommend ASOD which occasionally features the Moon, and always has personal representations of the broader cosmos every day.