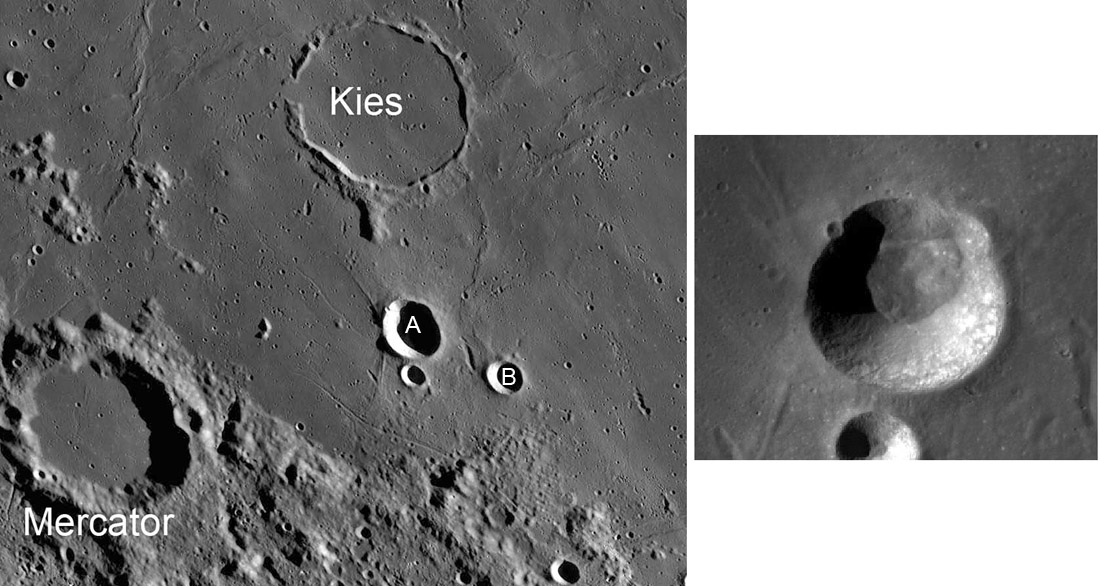 While looking at the wonderful nomenclature map Maurice Collins constructed with the LRO WAC mosaic I noticed a strange curved ridge tangent to Kies A. It immediately reminded me of a similar curved ridge or septum between Plato K and KA. This latter case is explained as being created by converging ejecta from two simultaneously formed craters, but Kies A is just a single crater, although its shape is non-round. So I found a higher Sun LROC WAC view from the Quick Map - thanks ASU/NASA for two different mosaics! - that doesn't suggest two almost completely overlapping simulataneous craters. There is a small scallop on the northeast side where a collapse removed a small bite from the rim. Then I remembered a second case of a similar single crater arc at Cauchy. Cauchy is a perfectly normal circular crater so the curved ridge does not require an unusual crater to form. I wonder if an oblique impact could produce such a curved septum? Neither Cauchy nor Kies A is young enough to preserve rays to provide evidence for non-vertical impacts. Danny Caes had actually mentioned both Kies A and Cauchy in an LPOD comment in 2009 and he wondered if there were more of them, which is still a good question. Finding more examples might lead to clues as to their origin.