Difference between revisions of "August 5, 2019" 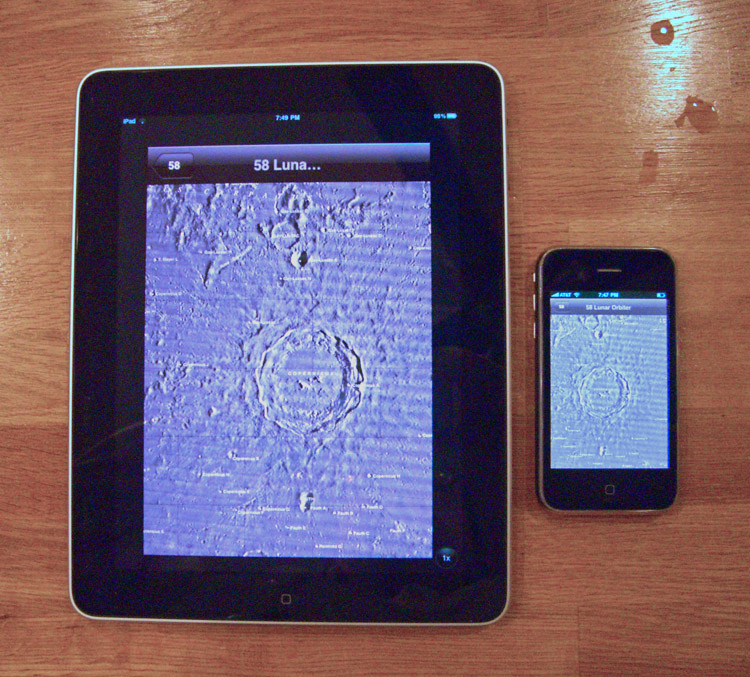 On the right is my trusty iPhone showing the very useful application MoonMapPro. Dwarfing the phone is iPad, displaying the same app, but on a space six times larger. They have essentially the same operating system but the larger screen makes a transformational difference. It is a marvel to have the entire lunar nomenclature in my pocket with the iPhone, but the larger images makes the information much easier to use. A question now is how else can the iPad make studying the Moon easier? One thing is with its 64 GB of memory that perhaps every book and scientific paper ever published about the Moon could be in your hand. Throw in the entire Moon-Wiki (577 MB) and every LPOD (probably about 700 MB). One lunar thing iPad can't store is every single image LRO expects to acquire (terabytes of data). Perhaps iPad will have a higher value as a very mobile educational device for public outreach. In a classroom or a star party an iPad could show images of what is being studied, simulations of how impact craters form, or models of lunar phases. With the right app it could be an observing guide to crater-hopping across the surface, with voice narration - perhaps like this audi file describing what is being seen. But probably the killer app for the Moon hasn't been thought of yet - or do you know what it might be?

Yesterday's LPOD: A Lovely Conjunction Between the Moon, with a Colorful Corona, Mars And the Beehive Open Cluster